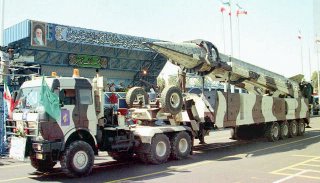 A disturbing report was published in the Jerusalem Post yesterday, suggesting that Iran has already enriched enough uranium fissionable material to manufacture at least one or two atom bombs

Their source is Rafi Eitan, a former Israeli intelligence chief who believes that Ahmadinejad "would not have dared come out with his declaration that Israel should be wiped off the map," unless he already had the means to do so. Eitan was involved in the secret planning and implementation of the attack on the Iraqi Osirak nuclear reactor in June 1981.

Although he is now eighty, Eitan is still active and still in touch with the intelligence community, so it would be unwise to ignore completely his views. Furthermore, other sources report rumours of an Iranian "experiment" in March. But one does wonder.

Putting various strands together, for Iran to pose a credible threat to Israel, it must not only have a functioning bomb, but also a reliable means of delivery. And here, not all the pieces are falling into place. 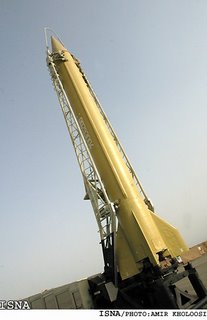 The most likely delivery vehicle is the Shahab 3 missile, a much modified version of a North Korean missile, developed with Russian and Chines technical assistance. There are later versions, running to the Shahab 6 series, but only this model seems to have the reliability to pose a credible threat.

Then, although the distance between Tehran and Tel Aviv is just under 1,000 miles, at the limit of the missile's range, firing from either the western provinces of Ilam or Khuzesatan, close to the Iraqi border, would shave 200 miles off that distance and bring the missile well within range.

However, what is interesting is that the Iranians have opted for a uranium rather than a plutonium bomb, which means that they can refine the material without recourse to a nuclear reactor (the latter being the only source of Plutonium). The down-side of this is that a uranium bomb is heavier (and also produced a lower explosive yield).

Using uranium would also simply the design, enabling the relatively crude "gun" arrangement of the type employed in the first atomic bomb dropped by the Americans on Hiroshima on 6 August 1945. Bit what must be remembered about that bomb is that it weighted in at 9,700 lbs, with a length of 10 ft and a diameter of 28 in. It also contained 140 lb of uranium.

Clearly, such a crude weapon could not be delivered by an intermediate-range missile like the Shahab 3, which has a maximum payload of a ton and serious dimensional limitations.

To enable missile delivery, the Iranians would have to produce a much more compact implosion device, which could be engineered to fit the limited warhead space of their missile. 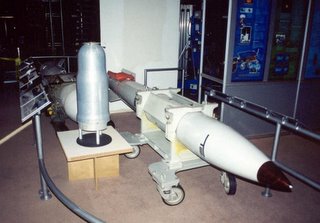 With all their skills and experience, the resources of the nation and no outside restriction placed upon them, it than took the Americans until 1966 to produce a lightweight implosion bomb, the B61 (pictured left). At 700 lbs, a length of 10 ft and a diameter of 10.75 in - with the actual nuclear device considerably smaller, this is the sort of development needed before the Iranians could fit out their missile. And, bearing in mind that this is a plutonium weapon, a uranium weapon would be heavier.

The technology required to produce this bomb is fearsome, not least the highly complex array of conventional explosives needed to trigger it, and to produce it would stretch Iranian capabilities and resources to the limit. Furthermore, such is the complexity that the Iranians would at least on live test to prove the design.

Even then, there have been doubts expressed as to whether the warhead dimensions of the Shahab 3 are sufficient even to accommodate a lightweight bomb, which raises further questions about Iranian preparedness.

Despite Rafi Eitan's concerns, therefore, an Iranian nuclear strike – or the acquisition of deliverable bombs - may be less than imminent, which raises questions as to why Eitan has gone public with his fears.

This could, of course, be part of the war of words, aimed at speeding up the reference to the UN Security Council, but it could also be part of the process of preparing Israeli and world opinion for a strike shortly after the Israeli general election, which is to be held on 28 March.

Whatever the truth, it looks like the possibility of an early Israeli strike cannot be ruled out, making the world of much more dangerous place than it was even a few months ago.