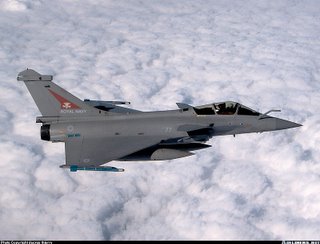 Unreported by the MSM – apart from a brief mention on BBC's Yesterday in Parliament – the Joint Strike fighter made an appearance in the House of Commons yesterday, during defence questions.

One supposes that, with the recent revelations in mind about talks with the French on the possible purchase of Rafale aircraft for the Royal Navy (illustrated), Mark Francois, Conservative member for Rayleigh asked the defence minister to make a statement on the JSF, a standard opening which then allows for the real substance in the supplementary.

The response came from Adam Ingram, who predictably told us nothing we did not know already, leaving Francois to home in with a guarded supplementary, asking: "what is the Government's plan B if, for any reason, the joint combat aircraft programme does not proceed?"

Ingram, in the style of "Yes Minister", dead-batted the question, remarking that "the Ministry of Defence has plans A to Z to deal with every eventuality…", and refused to be drawn on what they were, stating laconically that he would not "inform the hon. Gentleman what all the other options", his reason being that he was "sure that others would put that information to good use".

Ah, such is Parliamentary democracy.

A more interesting exchange had come earlier, when Tobias Ellwood, Conservative MP for Bournemouth, East asked the minister what recent discussions his Department has had with the United States about the transfer of military technology. In his supplementary, Ellwood then declared:

We have stood shoulder to shoulder with the Americans not only on the battlefield but in the corridors of diplomacy and on the factory floor. Joint efforts to build a replacement for the Sea Harrier are being challenged by a corner of Capitol Hill. Will the Minister and the Secretary of State do what they can to ensure that the necessary technology is shared? Otherwise, we will have two new aircraft carriers, but no aircraft to put on them.

Ingram did "not accept the hon. Gentleman's conclusion" but did inform us that Reid had raised the matter directly with the US secretary of state for defence in the past two weeks. 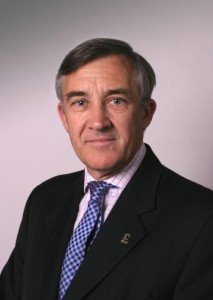 Labour MP for Chorley, Lindsay Hoyle, then took up the bowling, noting an article in The Times stating that Lord Drayson – defence procurement minister -had declared technology transfer a priority for the building of the joint strike fighter. Again he got a dead bat for his reward, opening the way for Gerald Howarth, the Conservative procurement shadow (pictured). Said Howarth:

It is true that we agree across the Dispatch Box that a failure by the United States to permit the transfer of technology to enable us to service our own aircraft would amount to an unacceptable loss of British sovereignty. However, do not US suspicions about its technology leaching out to France and elsewhere inevitably increase when Javier Solana states that he wants the European Defence Agency to be responsible for at least 20 percent. of all European military research spending? Ministers cannot have it both ways -protesting in Washington and then sneaking off to Brussels to sign up to technology sharing with our European partners is hardly likely to win friends in Congress.

Ingram's answer was a studied example of "he doth protest too much":

The hon. Gentleman sets a hare running that has no substance whatsoever. His allegation has no foundation. The fact that some senior representative in Europe expresses his point of view does not necessarily mean that it is our point of view.

Just to remind Ingram of the issues about which Congress is concerned, in addition to the UK's enthusiastic participation in the European Defence Agency, there are also the little matters of:

Just standing back from the fray, if you were American, would you be entirely happy to hand over to the British top-secret high-tech defence technology, worth billions of dollars, and be absolutely certain that there is no chance of any of the details finding their way to France, other European countries, or China? And if you had some doubts, what would you do in the American position, Mr Ingram?

Anyhow, it seems that CEO of BAE Systems, Mike Turner, has a way out for Ingram. He is suggesting that the British government should consider a plan to build a naval version of the Eurofighter as a "fallback" in case it can't get greater transfer of weapons technology on the Joint Strike Fighter

"We do not see any other fallback solution," Turner said. But then he would say that, wouldn't he.