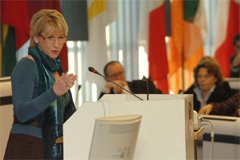 Entitled "Wallström's Hopes", it notes – to the surprise of no one – the "poor state of EU communication policy", but then remarks that "the new measures taken by commissioner Wallström hardly deliver anything new and had no effect in the past."

The key problem remains, the authors opine: "the request for more communication has to be addressed to those people in the member states who are in any case responsible for communicating EU policies to its citizens. These are parliaments, parties, politicians, media, educational institutions, NGOs etc."

There, the problem is that no one – particularly any national government - is really that keen on highlighting just how much the EU has taken over the reins of power. Thus, the EU is not going to get much help from the sources it identifies.

Nevertheless, on her blog, the Fragrant One waxes lyrical on her new strategy, but her blog itself has proved the classic example of why the commission itself cannot succeed.

Not least, on the subject which has dominated the headlines over the last week or so, Wallström is silent while her bog comments have now been taken over by an intervention from Hans-Martin Tillack, demonstrating that, even when she controls the medium, she cannot dominate the agenda.

Thus it is that a pattern is emerging, one which we see so commonly in EU affairs. At the end of 2006 the commission intends to present a White Paper on the information and communication policy of the EU, whose impact will be felt before 2008 – just before the European elections in 2009.

In the absence of action, the commission simply produces another strategy.