Impartial service to the law 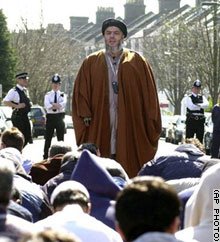 Go onto the BNP site and it will offer you two video clips. The first is of a Countryside Alliance demonstration in the Mall. It shows a genial crowd, standing around chatting, with a few policemen wandering around on the road.

Suddenly, there is a surge of movement and the camera catches a phalanx of police dressed in riot gear, moving purposefully into the picture. They line up and then groups form snatch squads, darting into the crowd to seize individuals, whom they drag into the road, with one at least being administered a vicious beating.

The other video shows last Friday's Muslim demonstration, the demonstrators displaying their murderous placards, the police positioned not to challenge the crowd but to protect it, and not a riot squad in sight.

The police, it seems, are becoming the most effective recruiters for the BNP . The Party is taking on new recruits so fast its administration is having difficulty coping and funds are pouring in. Reliable sources suggest that it has received over £100,000 donations in the last week, and the cheques and cash continue to arive.

The public profile of the Party has also been considerably enhanced by the prosecution of Nick Griffin and, today, inevitable comparisons are being made between the speed with which the authorities decided to drag Griffin into court, and the delays in bringing Abu Hamza ("The Hook") to justice.

Thus we find Dean Godson in The Times remarking that his imprisonment has come far too late. “The most amazing revelation from the Hook’s trial,” Godson writes,

…is that MI5 and the Metropolitan Police Special Branch effectively acquiesced in his years of largely untrammelled hate-mongering at the Finsbury Park mosque. His defending counsel, Edward Fitzgerald, QC, recalled the following exchange: "My sermon, is it a problem?" asked the one-eyed cleric. Came the reply from the Met: "You have freedom of speech. You don't have anything to worry about so long as we don't see blood on the streets."

Godson believes that this quite authentically reflect the spirit of the authorities' approach, "a policy of geopolitical Nimbyism", underlined on Newsnight by Anjem Choudary, spokesman for the extremist group al-Ghurabba, who defended the London demonstrators holding placards that called for the beheading anyone who insults Islam in wake of the cartoon controversy.

The article, which is well worth reading in full, then goes on to sketch out the various factor which have brought us to this situation, a laissez-faire attitude, which rightly earned the capital the sobriquet of "Londonistan".

But the theme is also taken up by Matthew d'Ancona in The Telegraph, under the heading, "Free speech? Labour cares more about the Muslim vote".

D’Ancona also makes use of the Newsnight transcript, this time citing Sayeeda Warsi, the Conservative vice-chairman, and a British-born Muslim of Pakistani background. Writes d’Ancona:

Unfazed by Mr Choudary's offensive claim that she was not entitled to speak because she was not wearing a veil, Ms Warsi spoke up for the very British determination not to fall for the frothing of the reactionary Right (we are all doomed) or to yield to the threats of Muslim extremists (you are all doomed). "I am confident," she said, "that in Britain the middle ground, the people who are prepared to engage in dialogue and live alongside each other with shared values and a sense of shared identity, that they will prevail." Firebrands like Mr Choudary, she said, had no place in multi-cultural Britain.

It takes a lot of courage for a Muslim woman to say such a thing, adds d’Ancona. Ms Warsi's intervention made the anodyne remarks of white male ministers seem all the more cowardly. 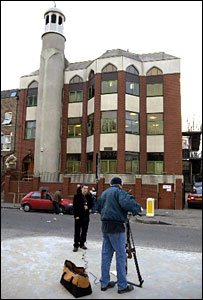 Warsi's intervention mirrors the statements made by other moderate Muslim leaders but this is not enough. Ministers have spent far too much time prancing about on a European stage, pontificating about global terrorism, and looking for "European solutions", neglecting their own back yard – where the murderous creed of Abu Hamza has been given free license. Now, unless they grasp these issues, the main beneficiary will be the BNP – to the detriment of the Muslim communities and the political process.

The first thing that must be done is to sort out a police force which seems to have lost its way. In this context, politicians might do well to remember Peel's nine principles of policing, framed in 1829, and in particular his injunction that, "Police seek and preserve public favour not by catering to public opinion but by constantly demonstrating absolute impartial service to the law."