It ain't all schools 'n' hospitals 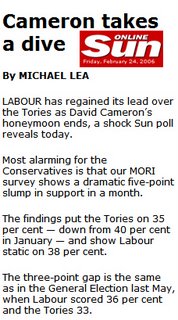 Remarkably, in a Mori poll carried out for The Sun today, "defence/foreign affairs/terrorism” were regarded as the most important issues facing Britain today.

These issues were offered spontaneously by 34 percent of the respondents questioned and compare with the NHS/Hospitals at 33 percent, race relations/immigration at 30 and education/schools at 25 percent. Crime/law and order comes in at 28 percent. And, for all the leftie breast-beating about Kyoto and global warming, "pollution/environment" scored a mere eight percent.

Given that the political classes spend most of their time telling us what they think is important, with public services at the top of the agenda – which must have an effect on public sentiment – the prominence of "defence/foreign affairs/terrorism" speaks volumes. It suggests that the likes of Cameron, who puts "environment" at or near the top of his own personal agenda, may be more out of touch than even we believed.

This might explain why, according to this poll, the Conservatives have slipped back in the popularity stakes to 35 percent, down from 40 percent in January, with Labour remaining static at 38 percent.

This, however, contrasts with the The Telegraph YouGov poll, which puts the Tories slightly in the lead at 38 percent, compared with Labour's 36 percent.

Even that, though, is hardly a ringing endorsement of the Boy King and, as The Telegraph says, "Voters think Cameron has a credibility gap". Perhaps if he focused on some grown-up issues – as indeed the public seem to be doing – he might fare better.