The depths of ignorance 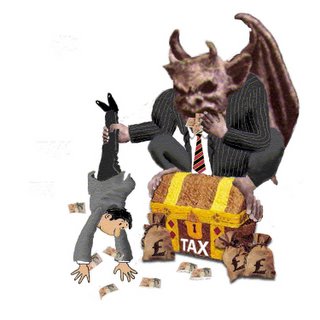 I see the moronic tendency is in full flood in The Daily Telegraph today, with a leader telling us that a "Local sales tax would help local democracy".

The topical hook for the piece is the news that Council Tax is to increase above inflation for the tenth year running. Yet again the bloated ranks of bureaucrats are dipping their hands into our wallets, and again we are expected to pay up, on pain on imprisonment if we do not oblige them.

Not that one disagrees with the general thrust of the Telegraph leader but where the morons doth speak is in their suggestion that councils should raise their own budgets by replacing VAT with a local sales tax (LST), in order to confer local accountability.

This is a lovely idea and one that we would endorse but no one could or should suggest it without also noting that VAT is an EU imposed tax and that member states are obliged to levy it under, currently, the VAT Sixth Directive. To replace VAT, as the Telegraph suggests, would immediately put us in breach of EU law.

There is a possibility, of course, that the Telegraph is merely being mischievous – and no doubt one or more of our forum members will argue thus. Be that as it may, to suggest abolishing VAT without also pointing out the implications and consequences is bizarre.

This leaves the distinct possibility that the leader-writer (and the editors who checked the copy) did not appreciate that we are dealing with an EU tax. And if that is representative of the depths of ignorance in the media, after more than 30 years of membership of the Community, then it is hardly surprising that politics in this country is in such a parlous state.