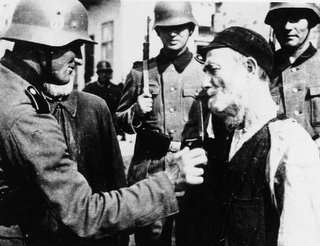 When the long and tortuous negotiations that resulted in the less than spectacular Centre for the Monitoring of Racism, Xenophobia and Anti-Semitism (all of which unaccountably have grown in leaps and bounds according to the Commission under its wise guidance) and the passing of various directives that would prevent any kind of discrimination, there was a strong suggestion that denial of Holocaust should be made a crime across the EU.

Fortunately, this lunatic idea did not take hold. At the time, I recall suggesting to one peer I have done research for that if there is a debate on the subject, he should suggest a parallel criminalization of denial of Communist crimes. That should fill our gaols up fairly quickly.

The subject has come up again in a slightly different form. We can all understand why denial of the Holocaust was made a crime in West Germany and Austria in the years after the war. The question is whether after 60 years of democracy that should still be the case.

While leap may be too strong an expression, I am bound to say that the people who stood on the right side of the War of the Danish Cartoons, have also acknowledged that Mr Irving ought not to be imprisoned for his sayings and writings. 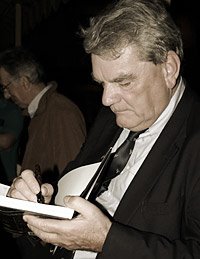 It really is a great shame about David Irving’s obsessions. He could, as Michael Burleigh made clear in last Wednesday’s Daily Telegraph, have been a good if somewhat eccentric military historian, where his almost unhinged obsession with archival evidence would have been quite useful.

Let me remind our readers that David Irving was the first historian to say that the Hitler diaries were a forgery. The then Regius Professor of Modern History at Oxford, Hugh Trevor Roper and the luminaries of the Sunday Times were happily taken in. (Some people, such as Hizonner, the Mayor of LondON, still believe them to be genuine.)

But what works sometimes does not at others. Internal evidence showed Irving that those diaries could not have been written by Hitler; this was supported in his mind by the absence of any archival reference to them. Fair enough. However, there are many occasions when archival material or lack of it is an insufficient guide to what might or might not have happened.

Irving did not precisely deny the Holocaust but insisted (though, he says he has changed his mind) that the numbers were not as high as 6 million, that there were no gas chambers and that Hitler knew nothing about the Final Solution.

The evidence for the camps and the gas chambers are plentiful and the notion that this could have gone on without Hitler knowing anything about it argues a complete lack of imagination and logical thinking. So yes, one could call Irving a Holocaust denier in the widest sense.

He is also a man much given to complaining about Jewish conspiracies (mostly against him) and speaking to pathetic neo-Nazi groups on the Continent.

“He's not a historian, he's a falsifier of history. This is about abuse of freedom of speech.”

Defining abuse of freedom of speech is difficult and likely to land you in messy situations. That this is one can be seen from the gleeful articles and cartoons published in Iranian and Middle Eastern newspapers. So, freedom of speech means insulting the Prophet but not casting doubts on the Holocaust? Very nice. Just the proof needed of the West’s evil intentions.

Herr Klackl is correct in most of his accusations – David Irving is a dishonest historian who has lied in order to deny some of the most horrible events of the twentieth century. The question is, should this sort of thing be decided in court?

Not just historians but a number of Jewish organizations have disagreed with the need to send Irivng to prison. It is sufficient, they say, to treat him and his views with disdain. After all, the man has no real credibility and was bankrupted after he had brought a libel case against Deborah Lipstadt and Penguin books. Ms Lipstadt, incidentally, also disagrees with Irving’s imprisonment, maintaining that censorship is wrong and reasoned argument is the best way of defeating such people.

Others, on the other hand, rejoice. Lord Janner, always the first to make pronouncements on such matters, expressed himself pleased with the conviction:

“It sends a clear message to the world that we must not tolerate the denial of the mass murders of the Holocaust.”

Well, I hate to have to disagree with any noble peer, especially such a charming one, who entertains his colleagues with magical tricks, but Lord Janner is talking through his hat. The only message it sends to the world is that we are obsessed with the Holocaust and have lost all understanding of it and of totalitarianism.

No historical event, however vile, is beyond debate, discussion and, yes, the telling of lies. Lord Janner might like to consider why so many members of his own party have denied the truth of the second attempt at a Holocaust by Stalin in 1951-53.

Come to think of it, I have not heard the noble lord pronounce on the subject either. Does he not know what happened to Jewish writers, scientists, intellectuals, doctors and so on? Does he not realize that Stalin was making plans to deport the entire Jewish population (those whom he had not succeeded in murdering) of the Soviet Union to Central Asia? Does he not care about the victims?

Melanie Phillips in one of her more overwrought diary entries on the blog argued that Irving was not simply a man who told lies but a danger to us all, one who incited to violence by posing in a belted mac (á la the Führer, one assumes) with some ghastly little neo-Nazis in Germany.

In the first place, he was not imprisoned for incitement to violence. In the second place, western democracy is surely strong enough to withstand the stupid posturings of some inadequate individuals. What does Ms Phillips think of people who parade up and down the streets of London in Red Army winter hats with the red star on them? Incitement to violence? Some people might think so.

What of those many left-wing groups that still proclaim the need for the overthrow of capitalism and the triumph of the working class by violence if necessary? Should they all be arrested? 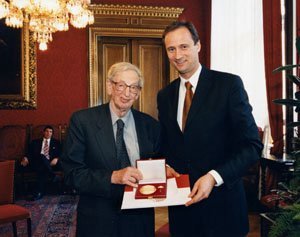 Well, of course not. But what of the historians who have been peddling lies about the Soviet Union, denying the horrors of Communism and generally abusing freedom of speech? What of Professor Eric Hobsbawm CH, given that honour by Tony Blair?

Throughout his long and distinguished career Professor Hobsbawm belonged to the CPGB (as long as there was a CPGB to belong to) and refused to acknowledge the Joseph Stalin was not the nicest possible man around, who occasionally got a little bit angry but what can you expect when you have the welfare of the world at heart.

Even in recent books Professor Hobsbawm implicitly denied the extent of Stalin’s and Mao’s mass murders, and was all coy about the victims of collectivization imposed by every single Communist tyrant from Uncle Joe to Colonel Mengistu. Far from being disdained, let alone arrested and imprisoned, the good professor is highly feted (Companion of Honour, no less) and his books are required reading by all university students of history.

All this, despite the fact that every single thing the Austrian judge or the British one in the Irving libel case of 2000 said about that wretched man can be said about Professor Hobsbawm (and numerous other, less eminent historians) with a few adjustments: instead of Nazism, Communism; instead of the Holocaust, the purges and collectivization; instead of mass murder, mass murder.

The egregious Theresa Villiers MP tried to deal with that issue on Question Time (I did not watch it as I never watch these things but I am told that she found herself out of her depth in no time at all). As Tory Diary on the Consevativehome blog reported:

“… the Tory MP said that the Holocaust was a uniquely depraved event in human history. She highlighted the fact that six million people had been exterminated in an industrial killing process because of their Judaism, their disability, their ethnicity or their homosexuality.”

Dear me. So an industrial killing process geared to the extermination of millions because of their class (peasantry, intelligentsia), nationality (Chechen, Tatar, Ingushi), religion (just about everybody) is not particularly depraved?

In this connection, let me bring up the argument that it is absolutely right for Germany and Austria to keep the legal ban on Holocaust denial because of their history. Especially, it is right for Austria, who took a very long time to take responsibility for its actions.

As I said above, it was right in 1946. Since then Austria and West Germany have been democracies and have stuck to that. Austria, in particular, has a spectacularly good record in helping refugees from the Soviet Union, Eastern Europe and the Balkans who fled the horrors of … ah yes, it was the wrong system they fled from and so Austrian generosity and helpfulness in 1956, 1968, 1980, 1990s cannot be taken into account. 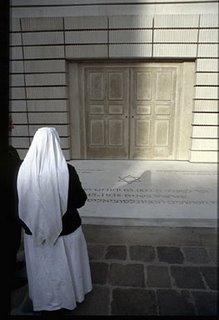 As it happens, I agree that Austria had to acknowledge her participation in many of the horrors of the Second World War. On my last visit to Vienna I was extremely pleased to see that on Judenplatz there was a large memorial to the Jews who had been deported from that city.

The memorial, I believe, went up before the present Mayor of Paris insisted on putting up plaques on various houses that enumerated the number of Jews who had been rounded up in that building and deported.

The ructions in Poland about Polish involvement in the Final Solution still go on. But the answer to all this is not make denial of Holocaust illegal. All that does is writes the so-far accepted version into stone.