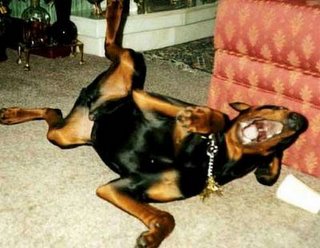 It was said of our small, Eurosceptic group in the warren of the EU parliament in Brussels that it was always easy to find us. You just had to listen for the laughter.

We tested this thesis by walking along the corridors of some of the other groups and, sure enough, you were greeted by a sepulchrous silence, the sort that you might experience in a church or other holy place.

I was reminded of this yesterday evening, when I addressed a meeting of the Kings College Europe group, on the last session of their "Europe week", alongside Reijo Kempinnen, Head of the European Commission Representation in the UK and Dr Lachezar Matev, the Bulgarian Ambassador.

The subject was "The future of Europe" and I just had to tell the Saddam Hussein "Star Trek" joke, which was greeted with a wan laugh. The Muslim lighter joke, however, was one too far and my comments about on commission's childproof lighter initiative coinciding with the Muslim fundamentalists buring flags and torching the Danish and Norwegian embassies brought a stern rebuke from the commission representative. How dare I make light (no pun intended this time) of something so serious as saving childrens' lives. 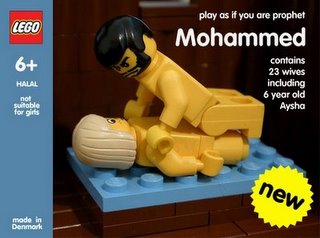 It was only afterwards, in discussion, that I got some agreement that Muslim fundamentalism was one of the greatest threats facing Western civilisation. But the thought occurred to me that one of the reasons why the European Union – and the tranzies – are so unable to understand the threat, or deal with it, is because the emanate from the well-spring. The Europhile zealots share, in the same way as their Muslim counterparts, that same humourless fundamentalism. That, it seems to me, is where the "clash of cultures" really starts.

It is a measure of how far they have misread the situation, however, that instead of being cowed, ordinary people have reacted to the violent denunciations by triggering an explosion of humour on the internet – but, of course, not in the po-faced MSM. The mock-up Lego box (above) demonstrates all too well that the fundamentalists are not getting their message through. I guess some people are not taking them seriously at all. 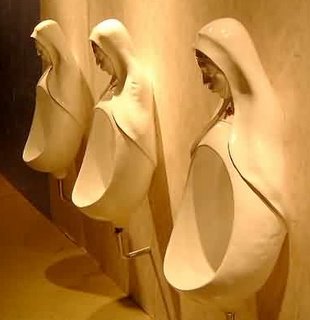 What these fundamentalists completely fail to understand is that humour is virtually written into our genetic code and even when one confronts something as shocking and as outrageous as this carefully worked piece, it is hard not to see the humour in it.

Clearly, the artist (photoshopper?) has gone to some considerable trouble and is certainly being offensive. But, if there is a choice between being mortally offended and laughing, the only sane response is to laugh and move on. 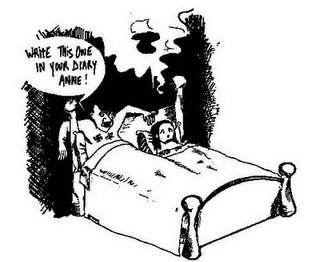 The same must be said of the Belgian Muslim who sought to his own brand of revenge against the Danish cartoons by producing his own, invoking the most sacred of secular issues – the Holocaust. Thus, in an attempt to shock, he produced this (right). However, I am sorry to say that, despite the declared intention to scandalise, I thought it rather funny, and witty – actually a refreshing change from the maudlin, po-faced rectitude of the likes of the Fragrant Margot and her over-reverential treatment of the subject. 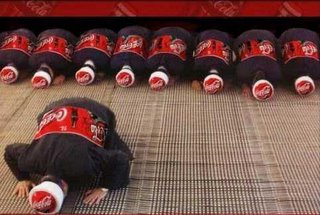 How could possibly look at this outrageous photograph (doctored of course) without cracking a smile, even if it takes the micky out of the holiest of rituals of the Muslims. Are we now going to have a boycott of Coca Cola throughout the Muslim world?

Like it or not, you have to admire that sick quality of the joke that runs: "Jesus walks into an inn, walks up to the bar, throws three nails on the counter and says to the girl, 'Hey do you think you can put me up for the night?'". Sick, it might be, but is anyone really going to be offended? And, speaking of prophets, one has to enjoy the simplicity of this visual gag (below), which invokes the baby Moses. Believe it or not, if the Koranic injunction applied to the depiction of Mohammed, then it applies equally to Moses for he too was a prophet. 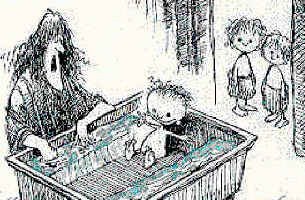 Interestingly, there is some hope for us. An Islamic site reminds its readers that the Prophet had a sense of humour and often laughed, enjoining them: "Go ahead. Read these Hadiths (sayings of Mohammed) and, for Allah's sake, please LIGHTEN UP (a) little bit…".

As Muslims gather throughout the world and go about their temper-tantrums, this is good advice, but one that is not being heeded. As much they might throw their weight about though, the internet is giving them their answer – that explosion of humour that is growing more voluminous by the day. It is a lesson that they are going to have to learn on one which, methinks, we will also have to apply to the Europhiles. Once we start taking the p**s out of them as well, we are onto a winner.

And if you want to see why the dog is laughing, go to this site.