A fundamental loss of faith 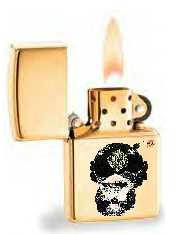 The commission forecasts that its stricter rules would "save at least 20
lives" although one cannot help but feel, in view of their incendiary proclivities, making Muslim-proof lighters might save even more. Perhaps they (the lighters) should bear an image of Mohammed, in the knowledge that no devout Muslim could possibly use them. Even a label on the bottom, rather than the top, instructing users to "press here", might confuse enough of them to make the difference. 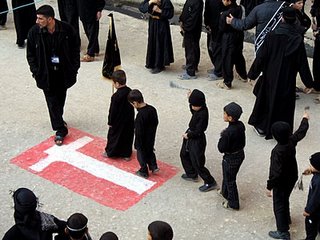 Away from such profound speculation, the importance of this "high level" initiative contrasts starkly with the complaints from Danish politicians, also retailed by EU Observer, over the lack of EU support in the country's current crisis over the Mohammed cartoons. There is a growing disappointment, says EU Observer, with the EU for its lack of support for the country at the centre of the conflict.

"This is a wider European problem and not just a Danish problem. I think it is strange the EU has been so absent in this discussion," says Holger K. Nielsen from the Socialist People's Party (SF). "They all sit on their hands and hope it will just go away. But it would be useful if the EU clearly and in a united way entered the fray," said Lars Erslev Andersen, one of the country's top Middle East experts.

In a round-up of events from Reuters today, it is clear that “it” will not go away, the agency reporting that the "wave of Muslim fury" is spreading across the Middle East and Asia.

That assertion may be taken with a pinch of salt, as the main player today has been Iran, where demonstrations are about as spontaneous as one of Tony Blair's smiles. There, an attack was mounted on the Danish embassy in Tehran, with petrol bombs and stones thrown for a second day. 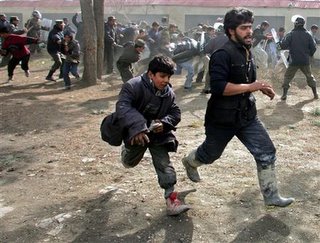 There has been sporadic violence in Afghanistan, where police opened fire on a crowd which tried to storm a NATO peacekeeping base housing Norwegian troops, while across the border in Pakistan, 10,000 people rallied. At least six people have now been killed in protests in Somalia, Lebanon and Afghanistan. Volatile rallies have swept across Europe, Asia and the Middle East.

Iraqi agitators have called for the seizure and killing of Danes and the boycott of Danish goods, while further protests were orchestrated in Egypt, Yemen, Djibouti, Gaza and Azerbaijan. Meanwhile, Croatia became the latest country where a newspaper printed the cartoons.

The inertia on the part of the EU, however, now begins to look more than a sudden loss of nerve and begins to suggest the re-emergence of in-built fault lines.

One is again reminded of the response of the then EEC to the Yom Kippur crisis in 1973, when the likes of Monnet called for a united European response and each of the member states slunk off to do their own deals with the Sheikhs. This time too, the member states are keeping their heads down, avoiding anything that might sound like a corporate statement. 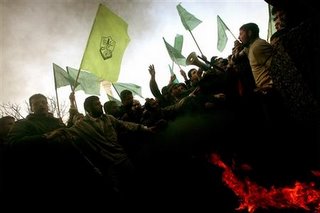 The parallels, however, can only go so far to explain the extraordinarily low visibility of the EU. Another factor must be the lack of leadership, not only from the Austrian presidency but also from the commission. Although, strictly speaking, foreign affairs lies within the domain of the European Council and the General Affairs Committee of the Council of Ministers, one cannot imagine that Jacques Delores would have been silent in the issue. But so silent is Barroso that he is invisible.

In other respects though, this is chickens come home to roost. The European Union prides itself in its commitment to freedom of speech, while also espousing the Arab/Islamist cause. Now, it finds itself torn between both, struggling with the conflict that arises from the demands of its political protégés.

But, if there is a philosophical conflict, there also seems to be an institutional failure. Following the Madrid bombings and its "Hague Programme" agenda, the EU has made combating terrorism a high-profile issue, an example of the unility of the "European dimension".

As the Danes are well aware, and even we have worked out, these "Cartoon Wars" are but one face of the Islamo-fascist assault on the West, fully orchestrated by terrorists sympathisers. Yet, if Europol is aware of this, one wonders whether it has conveyed that information to member states and the EU commission and, if it has, one cannot but help be puzzled as to why it has not informed the response.

Perhaps that is the real reason for the EU's inertia. Aware of how high the stakes really are, the Community institution feel it safer to cower in relative obscurity behind the member states, rather than confront the issues and expose itself to the full wrath of the Islamists.

If this is the case, what we have is a complete reversal of the Yom Kippur scenario. Then, the putative "superstate" demonstrated its immaturity by failing to craft a European response. Now, the heirs to those institutions have also displayed that immaturity, but this time by avoiding a European solution. In many ways – for the survival of the EU - this is an altogether more serious failing. Faced with Islamic fundamentalism, the EU is undergoing a fundamental loss of faith in its own "project". Can its collapse be far behind?