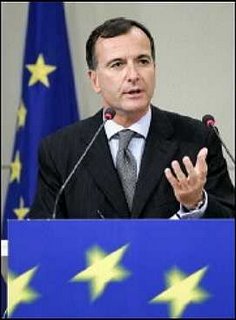 Illustrating the commission's total failure to grasp the nature of the Islamist response to the Mohammend cartoons, Franco Frattini, commissioner for justice, freedom and security, yesterday made an ill-judged attempt at appeasement.

In an attempt to placate the hardliners, he suggested a European press charter committing the media to "prudence" when reporting on Islam and other religions. Millions of European Muslims felt "humiliated", he said, calling on journalists and media chiefs to accept that "the exercising of a right is always the assumption of a responsibility".

This was according to The Daily Telegraph and others, but the only tangible "reward" was a promise from the Taliban of a 100 kilograms of gold to anyone who killed the person responsible for "blasphemous" cartoons in Denmark. 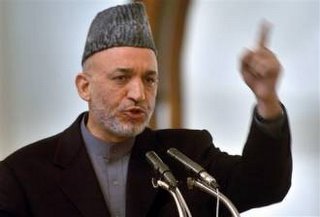 According to one report, Mullah Dadullah, the Taliban's chief military commander, also said the group would give five kilograms of gold to anyone who killed any military personnel from Denmark, Norway or Germany in Afghanistan. He added that the list of Taliban suicide attackers in Afghanistan had increased significantly after publication of the cartoons.

And, in response to an initiative from president Bush in Jordan yesterday, in an attempt to calm the situation, another emolient diplomat, Hizbullah leader Hassan Nasrallah, told him to to "shut his mouth". He is reported to have said, “We'll defend our prophet not just with our voices but with our blood. Muslims must continue to demonstrate until an apology is made”.

Nasrallah told Muslims around the world to continue to protest against the cartoons on Islam's prophet Muhammad until an apology for their publication is made, and until Europe passes laws forbidding any insults of Muhammad. 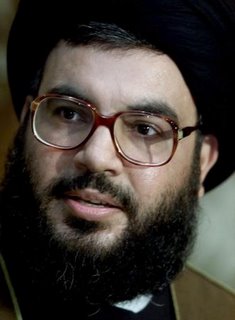 "The defense of the prophet must continue around the world. Condoleezza Rice and Bush and all of the other despots should shut their mouths. We the Islamic ummah (Muslim nation) cannot tolerate in silence or show flexibility when they insult the prophet and our holy values. We will keep (the faith) as emissaries of Allah, not just with our voice but also with our blood," said Nasrallah.

Back in Europe, one of the 12 Danish cartoonists who drew the caricatures has told a German newspaper he now faces at least two death threats, saying all 12 cartoonists were under police protection.

Meanwhile, a mass demonstration of 100,000 Muslims is scheduled to take place in London next weekend. The Muslim Action Committee, an umbrella group that claims to represent more than a million Muslims, said it needed to "channel" growing anger felt across Britain that Muslims were being persecuted and made to feel like "second-class citizens".

Judging from the reactions of militant Muslim groups, it should be clear by now that appeasement is not going to work – as if we needed any confirmation of that. Certainly, the low life are not going to accept the commission's whish-washy idea of press self-regulation and, as Franco Frattini has made clear in a statement published on the fragrant Margot’s blog, "There have never been, nor will there be any plans by the European Commission to have some sort of EU regulation, nor is there any legal basis for doing so."

The Danish government, however, is taking a more robust line, announcing that it would exclude local imams from talks on ethnic minority integration. "I think we have a clear picture today that it's not the imams we should be placing our trust in if we want integration in Denmark to work," Immigration Minister Rikke Hvilshoj told the Berlingske Tidende newspaper.

For Frattini and his fellow travellers, though, the nightmare will continue as Europe's "soft power" turns to jelly.