The sound of Salzburg 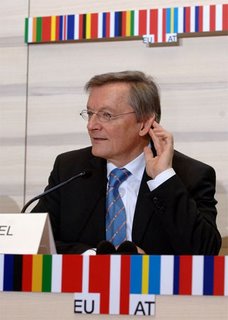 The meeting “The Sound of Europe” has come to an end with very little to show for the great event – but then what did anyone expect?

There have been various accounts of what, if anything, had been achieved and the one that made me laugh out loud was in the English language Wiener Zeitung:

“It was to be a talk on common values (such as music) and future trends but artists say it was all just hot air; politicians could not agree on whether or not Europe really was in a crisis but the president of the EU-commission, José Manuel Barroso, said it was a “wonderful group and music therapy”.”

Why anyone should think that politicians are the right people to discuss Europe’s art, music and culture in general, remains a mystery.

The answer is, presumably, that it was not that they were discussing but, as is their wont, they were using such words as “art” and “music” and “culture” to promote their own cherished project, European integration and the constitution, in the hopes that nobody notices that these are not at all the same concepts.

Even the Financial Times managed an ironic title: “Leaders sing the praises of the ‘European Project’”. Not Mozart precisely, though Richard Strauss might have been persuaded to write somewhat satirical music for an opera buffa.

The FT’s Brussels Bureau Chief seems to have been unimpressed:

“But as so often with such initiatives, the Sound of Europe conference in Salzburg was notable for the presence of the continent’s political, cultural and academic elite and the absence of ordinary citizens.

The only connection with the views of citizens was via a video presentation, inevitably hit by a technical glitch that left their voices unheard. The Sound of Europe began with the sound of the people’s silence.”

It seems that Dominique de Villepin and Jan Peter Balkenende assured the listeners that the people of their countries did not vote “No to Europe”. Probably not, since it is impossible to vote No to a continent. They did, however, indubitably vote No to the European Constitution and that is really the problem all the attendees (mostly, one understands from the older members of the EU) had to face.

On the whole, they seem to have been rather confused. On the one hand, Europe is all about culture, with poor old Mozart being the finest representative of artists rising above national boundaries. This clearly could not have happened without the EU, except that, wait a minute …. Mozart was born 250 years ago and the EU was not precisely a lively force at the time. (Though there were various attempts to integrate the countries whether they liked it or not. Step forward Louis XIV, Louis XV and Napoleon.)

Remembering this, Austrian Chancellor and temporary European President Wolfgang Schüssel called on all present to ensure that the EU is about more than just economics. How often have we heard that particular serenade? The trouble is that while people might just about put up with it being about economics (and increasingly less so), as soon as they fully realize it is about other things, they decide against it.

In fact, there was an awful lot that we have heard before:

“Both Mr Schüssel and Mr Barroso vowed to respond to demands from citizens that Europe stop interfering in areas that should be the domain of national or local authorities.”

All well and good but Commission President Barroso also

“… believes the European Union needs to take decisive policy action in areas such as energy supplies, better regulation and opening up the single market in services before troubling voters again with the constitution, with its raft of institutional innovations such as an EU foreign minister and full-time president.”

Inevitably, the prize for asinine comments must go to a theatre director:

“Others such as Jürgen Flimm, the German theatre director, said the problem was a lack of understanding of Europe’s cultural heritage, and that “workers in Romania and farmers in Bulgaria” needed to know more about EU culture.”

As Expatica, the English language news service from Belgium, explains, the whole shebang was criticized by the Austrian Social-Democrats, who held their own conference in Dublin, by the group of “independence and democracies” in the European Parliament and by anyone else who noticed that the conference included all the same suspects discussing the same matters.

Whatever happened to D for dialogue with all the citizens?

Never mind, Mark Leonard, the boy-wonder of NuLab and of the europhile intelligentsia in this country, was there and was quoted by the BBC. Interestingly, the BBC, which hosted the debate during which Master Mark was heavily defeated by Charles Dumas and myself, did not bother to ask anyone who may harbour doubts about the project.

Try as I might I cannot find confirmation of David Rennie’s account that there was a discussion about creating an EU news channel, heavily subsidized by the taxpayer. It is possible that the delegates in Salzburg were not aware that such a news channel, Euronews, already exists.

Maybe they were not aware of the French attempt to set up a rival to CNN, currenly floundering for lack of finance, as we have reported before.

Maybe, they actually meant something else. Not a news channel but a real TV channel with other programmes: documentaries, plays, crime series, soaps and reality TV shows. I think there are plenty of possibilities there.