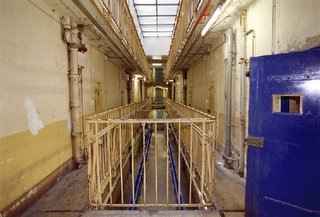 According to some, France prides itself on being the country that “invented human rights” two hundred years ago. If these misguided people mean the French Revolution, then they clearly have not read its history properly. What France tried to put into effect was the concept of the Popular Will – a tyranny from which there is no appeal.

If the French do, indeed, feel proud of their human rights record (which they can do only if they have not read much about their colonial behaviour, the history of the Algerian war and certain episodes not unconnected with peaceful Algerian demonstrators being beaten up and thrown into the Seine), they are to be shaken ever so slightly.

On Wednesday the Council of Europe is due to publish a report by it Human Rights Commissioner, Alvaro Gil-Robles, about his fact-finding tour of the French prisons in September. We wrote about this at the time.

The report was leaked to Le Parisien, who published details at the week-end.

“Commenting on a detention center for asylum seekers and illegal immigrants in the basement of the palatial central court building in Paris, a stone's throw from Notre Dame Cathedral, Gil-Robles called it a "flagrant violation of human rights."

"With the possible exception of Moldova, I have never seen a worse facility," he said, urging the government to separate convicts from those still awaiting trial and to limit the length of time spent in solitary confinement.”

Nice touch, that comparison with Moldova.

The Minister of Interior, Nicolas Sarkozy, one of the presidents-in-waiting, promised to investigate and to overhaul the prison system, pointing out quite reasonably on the radio:

M Sarkozy is promising another investigation after the publication of a book by three journalists that include accounts by several police officers, Place Beauveau. The latter give graphic accounts of the alleged treatment given to a number of terror suspects in 1995 after a wave of bombings by radical Islamists in the Paris metro. Eight people were killed and many more injured.

The accounts of the torture do not seem to be that different from previous accounts of French police treatment of suspects. Nevertheless, M Sarkozy has promised to investigate whether the allegations are accurate and, if needs be, punish those involved.