What's yours is mine… 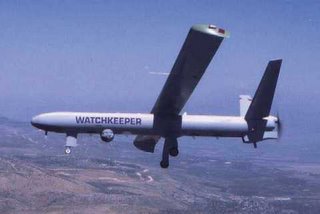 In October last year, the MoD proudly announced the award of a contract to the French-owned Thales company to build the Watchkeeper Unmanned Aerial Vehicle (UAV) for the British Army.

To fulfil the contract, worth £317 million for 99 of the Israeli-designed Elbit Systems WK-450s, Thales set up a joint venture company in Leicester called UAv Tactical Systems Ltd. (U-Tacs), with the MoD preening itself on how many jobs would be created in Britain.

Now, however, it seems that it is not only the British workman who will be a beneficiary. According to The Business, the French taxpayers – to say nothing of Thales – might be set to make a significant windfall.

Fortified by the MoD contract, Thales is now angling to supply the Watchkeeper system to the French armed forces, claiming that it could meet 70 percent of French needs, at 30 percent of the cost of the rival EuroMALE UAV offered by EADS.

But what is more significant about this cosy little arrangement, if it comes off, is the porous relationship between the UK and French defence contractors. Although Thales (UK) is regarded by the MoD as a British company, it is very clear that anything handled by this wholly French-owned subsidiary quickly becomes available to the French government.

Small wonder, therefore, that the United States is increasingly reluctant to share technology with the British –including UAV technology – when it seems the French operate on the principle of “what’s yours is mine and what’s mine is mine”.

However, it does not stop there. One of the partners to this project is the newly privatised Qinetiq defence research company, which will be developing some of the key systems for Watchkeeper.

By coincidence, the fate of this company is raised by Booker in his column on the incredible shrinking Sunday Telegraph today. As thousands of would-be shareholders rushed to invest in Qinetiq, he questions whether they were altogether wise, in light of the MoD's new policy to buy defence equipment, whenever possible, designed and built in other countries of the EU, rather than in Britain or America.

Certainly, from the Watchkeeper experience, it seems that they may – at least in part - be investing in supplying updated technology to the French.