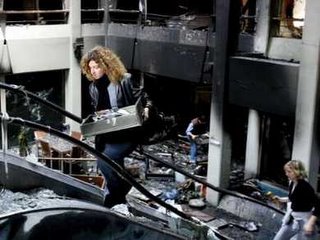 The Washington Times reports that while the American government (or the State Department, which is not necessarily the same thing) has been calling on its Middle Eastern “allies”, including Saudi Arabia, to calm the furore supposedly caused by those cartoons, Lebanon has taken matters into its own hands.

“In Beirut, the anti-Syrian coalition that dominates the Lebanese government apologized to Denmark for the burning of its consulate on Sunday, while charging that Syrian intelligence agents had sparked the trouble to destabilize their country.

"The acts of sabotage that happened in [Sunday's] protest are the start of a coup d'etat by the Syrian regime that aims to transform Lebanon into another Iraq," said the coalition. It specifically blamed Syrian officers led by military intelligence chief Asef Shawkat, brother-in-law of President Bashar Assad.”

Not particularly surprising in view of what we have been trying to piece together on this blog (and we are not alone in this) but heartening.

For one thing it reminds us that there are many problems in the Middle East, not just the Israeli-Palestinian one that is used for any and every act of violence and oppression.

Secondly, it shows that the Lebanese government is prepared to put up some kind of a fight against Baby Assad and his ambitions. He, on the other hand, has been meeting with Muqtada al-Sadr, who has been organizing protests over the cartoons in Iraq.

Meanwhile State Department spokesman Sean McCormack said that Assistant Secretary of State David Welch called in the Syrian ambassador over the week-end to protest against the burning of the Danish embassy, adding:

“Syria is a country where protests don't just occur spontaneously, certainly not of this sort, not without the knowledge and support of the government.”

Not all the news from the front is good. According to an English-language Swedish news service, a text book that had shown mediaeval Islamic pictures of Mohammed have been withdrawn.

First a school sent them back, claiming that they were too old (the books not the illustrations) and they had better material now, then the publisher, Liber, decided to stop their sale.

“Abd al Haqq Kielan, a spokesman for Sweden's Muslims, said he found it "painful" that pictures of the prophet were still used in education. He added that he was dissatisfied that the people responsible for Swedish teaching books had not shown consideration.

However, he said that it was a consolation that the pictures in the book were not prejudiced or defamatory.”

Well, how nice. And, presumably, he did not notice that they were Islamic pictures. The Swedish publishers, having made the announcement, have declined to comment.