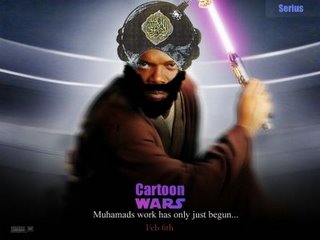 Simon Heffer, in today's Telegraph, warns that the police must take note of the internationally co-ordinated and highly opportunistic nature of the "Cartoon Wars", which clearly "took some months to arrange".

How far, he asks, do our security services have the measure of those who were waving their placards of death last week, and how much do they know of what else they do to advance militant Islam?

One would hope, in this instance, that they were in close tough with their Danish colleagues, as details are beginning to emerge of the sinister role played Ahmed Abdel Rahman Abu Laban, better known as Abu Laban, who is given detailed treatment in National Review.

The long article in NR points out that the anti-Danish emotional wave coming from the Muslim world is indeed far from a spontaneous reaction. It has been cunningly orchestrated by Abu Laban who has been building an Islamist base in Denmark for the last 15 years.

What is specially significant about this 60-year-old Palestinian imam is that, until 1990 when he fled Egypt, he was translator and assistant to a key figure in the terrorist group Gamaa Islamiya. Directly and indirectly, through this organisation, Laban has had direct contact with senior figures in what is now al Qaeda, including Ayman al-Zawahari, Bin Laden's right-hand man. 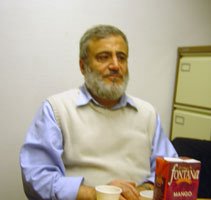 Of the more notorious activities he has conducted from his new base in Copenhagen – where he has resided since 1993 - he has worked as translator and distributor of the magazine Al Murabitoun. This glorified the killing of Western tourists in Egypt and urged the annihilation of Jews in Palestine. Laban has also worked closely with Said Mansour, a Moroccan man currently charged in Denmark with running a publishing house that distributed jihadi material.

Laban is the man who, in December 2004, as leader of the Islamic Community in Denmark, called on Muslims to oppose the government's immigration policies and told his followers that they should do their utmost to oust the government in the general election.

A highly political man, therefore, with a declared hostility to the current government, it was also he who sought to internationalise the cartoons issue, leading a delegation to a number of Muslim countries, where he met with senior officials and prominent scholars. These included Arab League Secretary Amr Moussa, Grand Imam of Al-Azhar Sheikh Mohammad Sayyed Tantawi, and Sunni Islam's most influential scholar, Yusuf al Qaradawi.

To them he showed not only the cartoons from Jyllands-Posten but others that had never been published by any Danish publication. The new cartoons were far more offensive, showing the Prophet Mohammed with a pig face and having sexual intercourse with a dog. That, with other provocative material, inspired Qaradawi, the real brains behind the Muslim Brotherhood's international network and a key opinion maker in the Middle East, to attack Denmark directly. This led to the Saudi boycott which was one of the main triggers of the current crisis.

Then, according to one of our Swedish forum members - relying on untranslated Scandinavian material - around 10 January there was yet again an appalling tragedy among the pilgrims to Mecca - some 250-300 persons crushed to death in a stampede. It is around this time the e-mails and sms started to flow, urging Saudi Arabia to boycott Denmark - and Norway, which a week earlier had republished the cartoons. 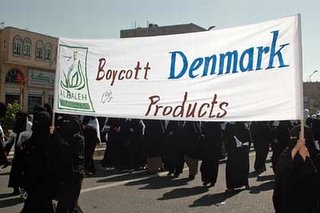 On 26 January the Saudi ambassador was recalled from Copenhagen and, it is not beyond one's imagination to think that the Saudis used the Cartoon War to divert public attention from their tragedy.

Although, perhaps, by the end of January, the Saudis thought they had gone far enough, by then the Palastine Authority elections showed Hamas as the winner, outflanking the al Aqsa Martyrs Brigade of the defeated Fatah movement. The day after Hamas's win they demanded a boycott of the unbelievers who had blasphemed the Prophet, and occupied the EU office in Gaza.

In Syria President Assad probably saw in the same issue a way out of his self-inflicted problems, hence the demonstrations and torching of a few embassies on Saturday, plus the bus service for those pleasant bar-b-q-ers to Beirut for an encore on Sunday. Obviously, nothing would suit Assad better than a new conflict along religious lines in Lebanon. Iran, equally, has its own agenda, as do remnants of the Taliban in Afghanistan, for which the cartoons have been used as a stick to beat the Americans.

The point that emerges from all this is that the "Cartoon Wars" have less to do with Islamic sensibilities than they do political manoeuvring by a wide-ranging amalgam of Islamist groups, each for their own particular advantages – including London group where, as we are informed, Gamaa Islamiya is known to operate.

Anyone who thinks this is about freedom of speech, therefore, or about "multiculturalism" or community relations, is sadly deluded. We are being embroiled in a vicious, unprincipled, politically-motivated campaign aimed at securing advantage for the militant Islamic fringe.

No wonder Dr Ghayasuddin Siddiqui, of the Muslim Parliament of Britain, Inayat Bunglawala, of the Muslim Council of Britain, and Sir Iqbal Sacranie, the MCB's general secretary, are so quick and keen to speak out against the appalling behaviour of the extremists during the London demonstrations. Now is the time to listen to them, rather than the siren voices who urge concessions and a "softly-softly" approach.

The broader Muslim community in Britain, as much as anyone else, is the victim of this sinister manipulation and the best thing for all of us, would be for the authorities to crack down hard on those whose objectives are to sow discontent and hatred.