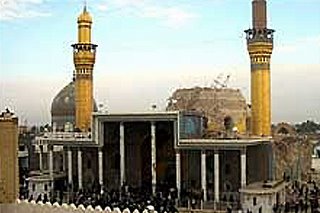 Given the synthetic fury engendered in the Muslim world by the Danish cartoons, it is highly significant that we should now read reports of "tens of thousands of people" staging protests across Iraq after a bomb attack heavily damaged one of the holiest sites in Shia Islam, the al-Askari shrine in Samarra.

It is also significant that the blast occurred early this morning and, within hours, there were demonstrators outside the mosque waving Iraqi flags and calling for justice. 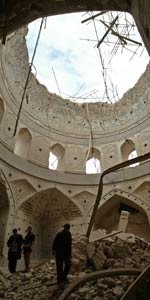 In addition to these demonstrations, in Basra, gunmen attacked Sunni mosques and exchange fire with guards at an office of the Sunni Iraqi Islamic Party. Businesses shut down in Najaf and about 1,000 marched through the streets, waving flags and shouting slogans. Markets, shops and stalls closed in Diwaniya and a Mehdi Army militiaman was killed in clashes after gunmen from the faction attacked Sunni houses.

Inevitably, it seems on these occasions, where about 3,000 people gathered in the Shia city of Kut, demonstrators chanted anti-American and anti-Israeli slogans and burnt US and Israeli flags.

Nevertheless, the scale and true spontaneity of these responses is a far cry from the "slow burn" response to the publication of the Danish cartoons, which did not take off until four months after the event. That sort of puts the "Cartoon Wars" into perspective.