They’ve given them back… 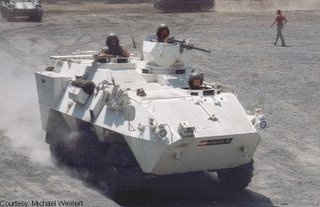 Apparently, after the hilarious episode when the Authorities in Equatorial Guinea seized a goodly portion of the Belgian Army's equipment in the mistaken belief that a coup d'etat was being mounted against them, an AFP report dated 13 February (today) on the Tehran Times website states that the equipment was returned to the ship, MV Eurocarrier, last Friday.

According to the same source, an official in the foreign ministry in Belgium, has said that the Eurocarrier was scheduled to leave Malabo for the Tanzanian commercial capital Dar es Salaam (last) Saturday evening.