Frattini has a way with words 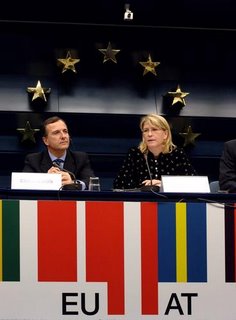 Only IrelandOn-Line and EUObserver reported the interesting news that the EU justice ministers have decided not to go ahead with the plans to harmonize rules to do with defamation in the media.

“The proposed law aims to define which national law applies in disputes where individuals or companies from different countries are involved, including non-EU member states. However, ministers meeting in Brussels on Tuesday (21 February) decided to postpone the law after it became clear that unanimous agreement would not be possible.”

There were many problems with the whole issue, as various journalist organizations pointed out:

“Media organisations, NGOs and politicians warned of damage to the principle of freedom of speech, arguing that a Swedish newspaper, for instance, could be sentenced according to Syrian or Pakistani law following a law suit on defamation from a citizen in either of these countries.

Critics also pointed out that an inconvenient practical consequence of the commission proposal would be that media in one country would be obliged to have knowledge of all other countries' media laws - which would be impossible to oversee.”

Commissar Frattini promised that they would harmonize whatever they can and, as for defamation: it would not be swept under the carpet, just more time was needed.

There is just one problem with that. According to Reuters India for January 31, the Commission had decided then to “scrap a bid to define common rules on which national legislation should apply in cross-border media defamation cases”. In which case, what were the ministers discussing and what was not going to be swept under the carpet?