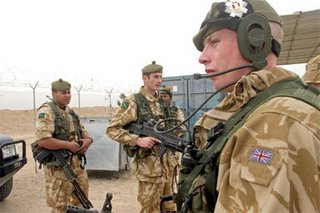 Two British soldiers were killed in Iraq today and a third was injured after their patrol was attacked. The attack was in Amara, a city in the Maysan province of southern Iraq just north of Basra, where the main British base is located. There were unconfirmed reports that the soldiers died after being hit by a roadside bomb - an attack tactic used regularly by insurgents against coalition troops. A local witness said a car bomb had targeted the patrol.

Now have a look at this.