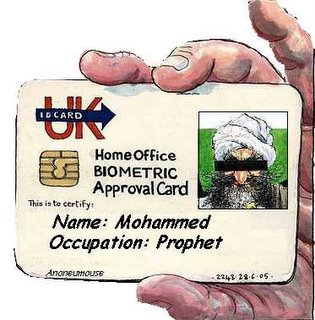 There was a slight hope that there would be enough Labour rebels in the Commons today to vote out the government's ID card scheme, which was seeking back-door compulsion by arranging for issue of ID cards when people renewed or applied for new passports.

But, according to a report on the Scotsman website, the government has survived the crunch Commons vote by a margin of 310 to 279, a majority of 31. It is thought that around 20 Labour rebels voted with the opposition.

In the vote, ministers overturned an amendment to the Bill by the House of Lords which would have given people a choice as to whether to acquire an ID card when they got a new passport. Peers will now have to decide whether they want to try to reinstate the amendment when the Bill returns to the Lords, threatening a constitutional stand-off between the two Houses.

So, we get closer to our EU bretheren, most of whom demand of their citizens that they carry ID cards to prove who they are. And, while there is no direct link between our government's plans and any EU requirement, there is definitely a common hymn sheet when it comes to the adoption of an EU-wide biometric standard.

But, as Anoneumouse suggests in his cartoon, they would have had difficulty with the Prophet.