Why do we appease these people? 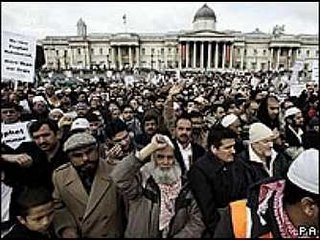 Odd word, appeasement. Its best-known use is about the British political establishment of the thirties. Appeasement as practised, supposedly, by Chamberlain’s government, led to a misunderstanding of Hitler’s intentions and a refusal to stand up to the bully.

There are various problems with that rather simplistic view. One is that, originally, appeasement grew out of a strong feeling that the terms of the Versailles Treaty were unnecessarily harsh and there was no need to punish Germany to the extent they did. This feeling became stronger as France ratcheted up various demands, marched into the Ruhr in order to ensure the flow of reparations and proceeded to behave extremely badly.

The notion that anything is better than war, which should be only the last resort, is not precisely wrong or despicable. After all, we have heard it constantly in the last few decades. In fact, comments were further. War should not be used even as a last resort according to many a self-appointed commentator, who, no doubt, spits abuse at the very name of Chamberlain.

Most people in Britain preferred not to go to war in the thirties. They recalled the previous war. The politicians who supported negotiations, later called with some justice, appeasement, had been in the trenches, had lost sons, brothers, fathers. The rest of the country shared the mood well into the Second World War.

And what of the Labour Party? Of course, they knew all along, did they not, that Hitler was a menace who had to be defeated at all costs. Errrm no. The Labour Party continued to vote against rearmament under Baldwin and under Chamberlain. Their record on appeasement is considerably worse than that of the Conservatives.

Since then, political record has been patchy. There were Labour and Conservative politicians who were ready to stand up to Soviet bullying and many more who wanted to give in all along the way.

The same is true now and nowhere is it seen more clearly than in the War of the Danish Cartoons.

The rolling protests continue with 11 people killed in Libya by Libyan police. Somehow the whole thing was blamed on an Italian politician, who wore a t-shirt with one of the cartoons on it. Roberto Calderoli, a member of the Northern League, has now resigned in response to pressure form his colleagues.

On the other hand, there has been regrettably little publicity given to statements by Colonel Gaddafi “that one day the Islam will disseminate its power over the European countries”. For the time being, Muslim leaders find it impossible to disseminate their power over their own countries without the use of extreme force, but let that pass.

Meanwhile in another poorly attended demonstration in Pakistan (you can tell that from the angle of the photograph) an interesting placard was being carried by women wrapped in yashmaks.

The emphasis here is on poorly attended. As my colleague has pointed out, all the anti-cartoon demonstrators were sparse, though they made up in violence, both verbal and physical what they lacked in numbers.

As I write, news comes through that super-big Muslim demonstration today, that was going to consist of upwards of 100,000, managed to produce 10,000 at best. The so-called leaders cannot bring out their own people. In the West they are beginning to lose control over their own communities (though there is still a long way to go), as we have seen in Denmark. No wonder they have to scream abuse and demand impossible things, such as that the copyright of the cartoons be handed over to the Muslim community (define Muslim community, I’d say).

How fortunate from the point of view of the various self-appointed spokesmen, extremist politicians and imams that there is a large chunk of western media and political elite that will always whimper with fear and sacrifice anything and anyone in their desire to appease the bully.

In Wednesday’s Guardian, Kiku Day, a student of Japanese music of Danish origin and all-purpose sniffer-out of racism, lambasts Denmark that has, according to her, abandoned its liberal ideas in order to oppress minorities. It does not occur to Ms Day or to the editors of that wretched newspaper, that freedom of speech is part of the West’s liberal ideas.

But then, as Daily Ablution points out, the Guardian continues to publish old Communist sympathizers writing articles about the good side of Communism. Astonishingly enough, these articles are quite long.

Scott Burgess, the blogger, points out quite correctly, that these people do not even believe in the equivalence of cultures – they hate the West and all it stands for, even though it is only in the West they can function with impunity. He also lists some of what the Eurocentric “arrogant provincialism”, according to Martin Jacques, former editor of Marxism Today, consists of:

As opposed to that, these are the equivalent values in the culture that is so entirely admirable, according to Mr Jacques and, possibly, Ms Day:

So, precisely, why do we appease these people?