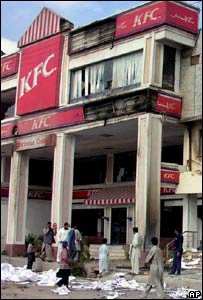 Over four months ago, a newspaper hitherto largely unknown outside Denmark published some cartoons of the prophet Mohammed. So, over four months later, we get three days of "spontaneous" rioting in Pakistan in protest, during which the demonstrators trash a Kentucky Fried Chicken outlet and burn an American flag. Yea, right. I'm impressed.

Even the BBC website is getting a little chary, although it like others have noted that five people have been killed in the riots in two major cities. With public as well as private property worth millions having been torched. 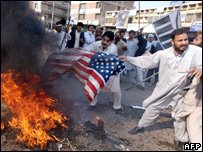 Buildings have been burned in Lahore and Peshawar, including cinemas, a theatre, banks, mobile phone outlets, fast food restaurants, the Punjab assembly building, petrol stations, music and video shops. Most of the vehicles set alight were motorbikes, which are owned mostly by lower middle class people. And, of course, there has been the ritual flag burning but, it seems, without the skills of the Gaza Ladies Sewing Circle, they had to make do with Old Glory. 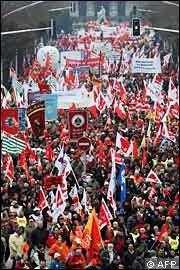 Meanwhile, some 20-25,000 protesters, mainly French and German, took to the streets in Strasbourg yesterday, over the Services Directive. They complained loudly and volubly outside the EU parliament about “social dumping” – Eurospeak for letting Polish plumbers and other unspeakables do jobs cheaper than their featherbedded counterparts in Old Europe. Democracy-loving Daniel Bohr of French union CGT, wearing a bright red T-shirt with a picture of Argentine revolutionary hero Che Guevara, spoke for them all, declaring that the directive "would destroy the rights of workers."

According to contacts in the parliament building, no one actually noticed the demo and, although there was a vote, no one can remember what it was about. Still, in that hothouse, it is very difficult to keep track of things but there is general consensus that most MEPs voted to support the general agreement, whatever that was – except of course those that didn't. 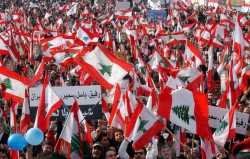 And, while the democrats were at play in France, between half a million and 800,00 Lebanese packed into Beirut's Martyrs' Square in the city centre. This was an anti-Syrian protest to mark the anniversary of the murder last year of the former prime minister Rafiq Hariri and the biggest gathering since a street uprising in the wake of Hariri's assassination brought down the government and forced Syria to withdraw its troops after a 29-year occupation.

Many of those packed into yesterday demanded the resignation of President Emile Lahoud, a Syrian ally who has held on to his position despite months of criticism. Many complain that Syria still exercises considerable influence in Lebanon.

They waved their own flags, Christians and Muslims together, chanted their chants and listened to the son the former prime minister. They then went home peacefully with not a single embassy burnt or car torched.

And so, another day, another demo. What do you do for an encore, one wonders.