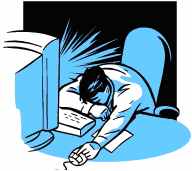 Looking at the EU stories up on Google, the first one we see is "WTO condemns EU over GMO moratorium". This is about the WTO ruling that the European Union and six member states had broken trade rules by barring entry to genetically modified crops and foods.

Then we get to the riveting subject of "EU looking at Net song royalties". European Union antitrust regulators, we are told, are investigating the European agencies that collect royalties for musicians from Internet sites, in parallel with other EU moves to open up the market for online music.

Only then do we get to the subject of the moment – the Cartoon Wars – but then all we are offered is: "EU joins UN, OIC in appealing for calm over cartoons". The European Union has joined the United Nations (UN) and the Organization of the Islamic Conference(OIC) on Tuesday appealing for restraint and calm over the Prophet Mohammad cartoons.

But then… wait for it… "'.eu' internet domain names open for business". Hundreds of thousands of businesses raced on Tuesday to snap up ".eu" internet domain names, with "sex.eu" taking the prize for the most sought-after address on the first day companies could apply.

And if that hasn't got your juices flowing, how about this: "Concerns over cigarette testing"? Scientists are calling for a review of cigarette tests, and say the tobacco industry uses a machine which gives misleadingly low results.

This is the great European Union which is going to dominate the 21st Century? Will anyone stay awake long enough?