Phew, the crisis is over! 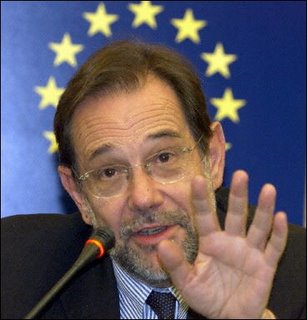 Reuter’s India reports from Riyadh (it is just the way desks are set up, I guess) that the crisis caused by the War of the Danish Cartoons is as good as over. That is not the way they put it, but the gist of the story is there.

It seems the High Panjandrum of EU foreign policy, Javier Solana, is going to travel round the Middle East, to calm passions. Since passions seem to have calmed somewhat already, this sounds like an excellent idea – if publicizing Señor Solana is the aim.

“Javier Solana kicks off the trip, which includes Egypt, Jordan, the Palestinian territories and Israel, with talks on Monday with the head of the Organisation of the Islamic Conference (OIC), which groups 57 Muslim countries. He later meets King Abdullah in Riyadh.”

The riots were in Damascus, Beirut and Teheran, as well as Gaza City, so it seems a little odd that Solana is visiting only one of those places. And what, precisely, has Israel to do with any of this?

“Asked on Al Arabiya television what message he wanted to deliver during the visit to ease the tensions, Solana said: "The message I carry is simple and it emphasises clearly that our relations are based on unrestricted mutual respect.

"Our respect does not stop at countries' borders and it includes all religions and specifically what concerns us here, our respect for the Islamic religion," Solana said in the remarks aired on Sunday, which were dubbed into Arabic by the station.”

This is seriously reassuring, particularly the bit about “unrestricted mutual respect” and not stopping at countries’ borders to include all religions. One can deduce from this that Solana will negotiate various rights for Christians in countries like Saudi Arabia, insist on Hamas not persecuting to the point of arson and murder the Palestinian Christians, and demand that the vicious anti-semitism propagated in various member states of the OIC cease forthwith.

What do you mean, is this a joke?