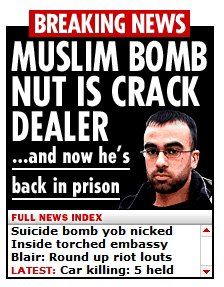 The Sun’s headline says it all. THREE days after Omar Khayam strutted his stuff outside the Danish embassy wearing a suicide bomber's vest, the Bedfordshire police have finally caught up with him and carted him off to nick where he clearly belongs.

Far from the injured innocent, this little shit is a convicted drug-dealer, out on license after serving part of a six-year sentence for dealing in crack cocaine. A man who spent time in jail with him told The Sun that Khayam was known by his street nickname "Skinner", and that he was well known to dealers and users in Bedford.

Of course, as The Sun rightly observes, Khayam’s crack-dealing past makes his claim to be defending Islam a sham. His Muslim faith strictly forbids taking or selling drugs — warning that offenders will be punished by God. Holy book the Koran says drugs are "the work of Satan". And selling drugs carries the death penalty in some Muslim countries.

What then does one make of the carefully-staged apology given by this low-life scum yesterday, flanked by the chairman of his local mosque and gullible but vote-hungry Patrick Hall, MP for Bedford

"I found the pictures deeply offensive as a Muslim and I felt the Danish newspaper had been provocative and controversial, deeply offensive and insensitive,” he told the assembled media. "Just because we have the right of free speech and a free media, it does not mean we may say and do as we please and not take into account the effect it will have on others,” he added, continuing:

But by me dressing the way I did, I did just that, exactly the same as the Danish newspaper, if not worse. My method of protest has offended many people, especially the families of the victims of the July bombings. This was not my intention.

What happened in July was a tragedy and un-Islamic. I do not condone these murderous acts, do not support terrorism or extremism and would like to apologise unreservedly and wholeheartedly to the families of the victims. I understand it was wrong, unjustified and insensitive of me to protest in this way.

Apparently, Plod Blair's finest were in the vicinity as Khayam spouted this self-justifying garbage, but did not interview this insult to the Muslim faith. They say that decision to arrest him was made with local police, "in recognition of their policing needs".

Meanwhile, that most incredible prat, Lord Carey, the former Archbishop of Canterbury, has denounced the Danish cartoons as a "quite deliberate racist attack" on the Muslim community. Yea… right on Bish!