Just as you thought it could not get any more ridiculous 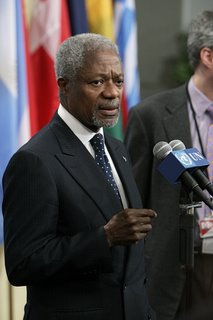 Thanks again to the excellent Little Green Footballs for calling attention to yet another ridiculous posturing by the SecGen Kofi Annan (father of Kojo). Instead of getting on with the task of reforming the UN (stop sniggering at the back), the egregious Kofi has been addressing – deep breath – the Open Session of the Second Meeting of the High Level Group For the Alliance of Civilizations. As Humpty-Dumpty said, there’s glory for you.

To make the whole affair even more ludicrous, it was taking place in Doha, Qatar. One assumes he went there just after accepting his $500,000 from Sheikh Mohammed bin Rashid al-Maktoum of Dubai.

Well, what did the SecGen say? The Alliance, he explained, had been set up to deal with “the sense of a widening gap and lack of mutual understanding between Islamic and Western societies”. Don’t know where the SecGen learnt his history, but I seem to recall periods (the fifteenth, sixteenth and seventeenth centuries spring to mind) when the gap and lack of mutual understanding was considerably wider. But, I suppose, “widening” is a relative term.

“At the heart of this crisis is a trend towards extremism in many societies. We should beware of overemphasizing it, because extremism in one group is almost always fed by the perception of extremism in another group. Few people think of themselves as extremists, but many can be pushed towards an extreme point of view, almost without noticing it, when they feel that the behaviour or language of others is extreme.”

Still, not all is lost. Most people are really pretty sensible and can always come to some arrangement though what the middle road between freedom and slavery might be, the SecGen did not explain.

“So let us always remember that those who shout loudest, or act in the most provocative ways, are not necessarily typical of the group on whose behalf they claim to speak. I think one can safely say that most non-Muslims in western societies have no desire to offend the Muslim community, and that most Muslims, even when offended, do not believe that violence or destruction is the right way to react.”

Well, that’s probably true though why, in that case, does the SecGen together with many other western political figures, such as our own Foreign Secretary, the execrable Jack Straw, should spend so much time appeasing the extremists in Islam, remains a mystery.

Annan has his own explanation of how the whole problem arose. It seems that the Danes have not yet adjusted to having a significant Muslim minority in their country and have been behaving as if the freedom that Europeans have fought for over centuries was still their birthright. Well, no, that is not quite the way the SecGen put it but that is the gist:

“In truth, the present conflicts and misunderstandings probably have more to do with proximity than with distance. The offensive caricatures of the Prophet Muhammad were first published in a European country which has recently acquired a significant Muslim population, and is not yet sure how to adjust to it. And some of the strongest reactions – perhaps especially the more violent ones – have been seen in Muslim countries where many people feel themselves the victims of excessive Western influence or interference.

Whether or not those who published the caricatures were deliberately seeking to provoke, there is no doubt that some of the violent reactions have encouraged extremist groups within European societies, whose agenda is to demonize Muslim immigrants, or even expel them.”

No doubt some of the violent reactions did encourage extremist groups. Most people have an objection to people parading through their cities, demanding beheadings, annihilation, a new Holocaust and other suchlike delightful concepts. They might start thinking that there is something wrong with those who come to live in Europe and abuse the hospitality to that extent.
They might also think that there is something wrong when members of the Muslim community are not allowed to express free views themselves and the female members are stoned, beaten, raped and murdered if they behave the way we all think it right in the West.

Sir Trevor Phillips, the chairman of the Commission for Racial Equality, for instance, said on TV this week-end that people in Britain should live under British law. If they wish to live under Shariah law, well, there are plenty of countries where they can do so.

The same, presumably, would apply to Denmark, Norway, France, Germany and many other countries.

But I digress. The SecGen disdained such details. His was a lofty view, appropriate to the Alliance of Civilizations that he was discussing:

“So misperception feeds extremism, and extremism appears to validate misperception. That is the vicious circle we have to break. That, as I see it, is the purpose of the Alliance.

It is important that we all realize that the problem is not with the faith but with a small group of the faithful – the extremists who tend to abuse and misinterpret the faith to support their cause, whether they derive it from the Koran, the Torah or the Gospel. We must not allow these extreme views to overshadow those of the majority and the mainstream. We must appeal to the majority to speak up and denounce those who disrespect values and principles of solidarity that are present in all great religions.”

Those of us who have been following events would say that of the three great texts cited above, only one has been used to any extent to abuse and misinterpret the faith and bring about violence recently. Perhaps, the SecGen has information the rest of us do not possess.

But I am glad he has mentioned the need for all religions and civilizations to understand each other, live peacefully with each other and open their borders to each other. I look forward to the day – surely not far off – when SecGen Kofi Annan opens the first Christian church and Sunday school in Saudi Arabia (or, for that matter, Qatar).