A tale of two parties 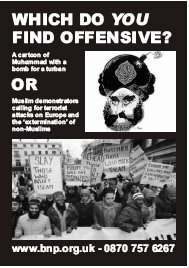 This weekend, while upwards of 100,000 Muslim protestors are expected in London to demonstrate against the Danish cartoons – or so the organisers claim – hundreds of BNP activists will be quietly going about their business, delivering a newly-published leaflet (illustrated).

The leaflets will be delivered to thousands of homes throughout England, targeted mainly on the areas in which the BNP expect to win seats in the forthcoming local government elections.

Prominent on the leaflet is the BNP website address, where browsers will find a plausible-sounding address from Nick Griffin. And, as the campaign heats up, he will no doubt be quick to point out that, whereas he is due to be retried on 15 May – 11 days after the election - for "seeking to incite racial hatred", so far not one of the Muslim placard-bearing demonstrators has yet even to be interviewed by police, much less charged.

The disparity of treatment allows the BNP to report that it is "riding a wave of sympathy", with funds from well-wishers flowing in at a record rate. 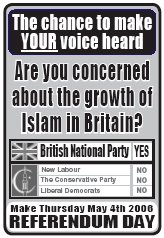 The campaign will no doubt be assisted by another leaflet, in which the tactics of the BNP seem to be to turn the local elections into a "referendum" on the growth of Islam in Britain. Given the outrage caused by the 3 February Muslim demonstrations, there is every indication that this tactic is going to have some success.

However, the BNP will not be the only minority party fighting the local government elections and one such, the UK Independence Party, will be making its bid for more seats. But, whatever its message might be, its visual image is dominated by the likes of this demonstrator, photographed outside the Houses of Parliament earlier this week, illustrating (below) the face of Euroscepticism that many believe is all too typical of the genre. 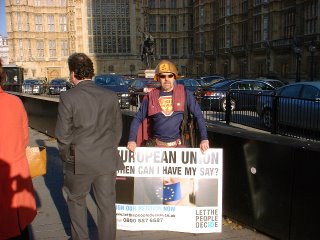 On the other hand, when it came to reacting to the Muslim demonstrations, UKIP failed to respond, invoking questions on its unofficial forum, asking whether the party would issue a press release. It took three days for the party then to issue a statement, through its leader Roger Knapman, but of such blandness that it rightly failed to make any impact.

To be fair, UKIP was not the only party to duck the issue, the Conservative response initially being less than robust and, to this day, the Boy King has yet to make a statement.

But it is the political vacuum created by the inactivity of the major parties that the smaller parties hope to exploit and, on this questions, it is the BNP that has made the running. UKIP is trailing behind. To an extent, the two parties compete for the same segment of the electorate and it is certainly the feeling that some of the BNP vote contributed to UKIP's electoral success at the Euro-elections.

Now, it seems, the positions could be reversed. And, if BNP does enjoy significant electoral success on 4 May, it will have that much stronger a platform from which to campaign for the following elections, possibly giving UKIP a run for its money. That party may thus find that while, in general, silence is golden, when it comes to politics, it is not such a good idea.