You know something is a bad idea when ... 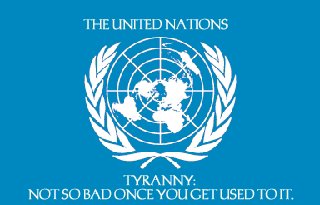 …. It is supported by SecGen Kofi Annan (father of Kojo), the U.N. Human Rights Commissioner Louise Arbour and two leading human rights organizations (Human Rights Watch and Amnesty International), as well as former President Jimmy Carter (the all purpose rent-a-quote supporter of all tranzis, dictators and terrorists) and other Nobel Prize winners.

Unsurprisingly, John Bolton, US Ambassador to the UN, is not impressed by the new and watered down proposal to reform the Human Rights Commission. That’s the body, as the Washington Post helpfully reminds us, which was responsible for the Universal Declaration of Human Rights but “has recently been tainted by the frequent election of members with dismal human rights records, such as Sudan and Zimbabwe”. And Cuba, and Libya, which chaired it, and many others.

I should imagine John Bolton has grasped the basic impossibility of working within an organization that sets up a Universal Declaration of Human Rights, then expands to take in scores of member states who do not understand the basic concept.

One of the main points of the proposed reform of the UN was a thorough overhaul of the Human Rights Commission to exclude countries with a poor internal record. Naturally, the idea has stalled.

“Senior U.S. and U.N. officials had sought to prevent countries with poor rights records from joining the new organization by raising the membership standards and requiring a two-thirds vote of the 191-member General Assembly for any nation's admittance. But the proposal met stiff resistance, and the current draft resolution would require members to be elected by an absolute majority -- at least 96 countries.”

So now Annan and the others are pleading with the United States to accept this somewhat inadequate proposal, pointing out that it will do some of the work needed:

“They noted that provisions to subject all council members to scrutiny of their human rights record would discourage countries with poor records from joining. They also said that council members suspected of abusive behavior can be suspended by a vote of two-thirds of the U.N. membership present.”

The notion that the sort of scrutiny the UN gives to its own organizations, let alone member states could discourage “countries with poor records from joining” is purest moonshine. These countries do not think they have poor records as they do not know what the heck everybody is talking about. The average UN inspection would not find a single bottle of hooch in a bootlegger’s hide-out.

And, of course, it would be so easy to get a country suspended by two-thirds of the vote. They may all vote to suspend Israel, if needs be, and America, at a pinch. But Sudan? DR Congo? Cuba? Forget it.