Totally out of touch 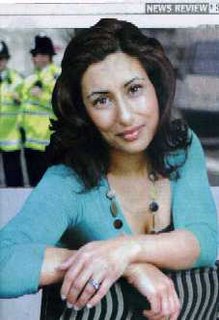 It would not be the first time that we have remarked that our politicians, closeted in the "Westminster bubble" are totally out of touch with public sentiment, not least on the views of the general public on our relationship with the European Union.

Rarely, however, does such a good opportunity present itself to demonstrate quite how divorced from reality these people are, than from a selected cull of news items from three newspapers.

The benchmark for comparison comes in today's Sunday Telegraph, with a piece by Patrick Hennessy and Melissa Kite, retailing the results of an ICM opinion poll that indicates forty percent of British Muslims want sharia law introduced into parts of the country.

Sharia law is, of course, Islamic law, which applies in large parts of the Middle East, including Iran and Saudi Arabia, where it is enforced by religious police. It imposes the dress code on women that we see most notably in the burqua, and the law is enforced by special courts which can hand down harsh punishments which can include stoning and amputation.

Nothing could be further from the traditions of British society and more contrary to the basic precepts of English law, to which effect any suggestion that this vile, alien construct should apply anywhere in Britain is totally unacceptable.

So, given that a significant proportion of a largely immigrant population reject the basic fundamentals of British society, how do the politicians react?

Well, Sadiq Khan, Labour MP for Tooting, says: "We must redouble our efforts to bring Muslims on board with the mainstream community. For all the efforts made since last July, things do not have appear to have got better." David Davis, shadow home secretary, says: "It shows we have a long way to go to win the battle of ideas within some parts of the Muslim community and why it is absolutely vital that we reinforce the voice of moderate Islam wherever possible."

As for the government, a spokesman for home secretary Charles Clarke adds to this melange by declaring: "It is critically important to ensure that Muslims, and all faiths, feel part of modern British society. Today's survey indicates we still have a long way to go… [but] we are committed to working with all faiths to ensure we achieve that end."

The most visible aspect of self-imposed Muslim separation from British society, however, is the dress code and, if we step outside the foetid confines of the political bubble, we get a somewhat different view. From Taj Hargey, Chairman, Muslim Educational Centre of Oxford, Oxford, in yesterday’s Telegraph letters, we get:

Too often, Islam is portrayed as a culture when it is a religion. British Muslims, particularly women, must distinguish between what is culture and what is creed and not confuse the two. The first step in this liberating process is to place less emphasis on customary and cultural clothing in order to be fully integrated, law-abiding British citizens.

Then, in today's Sunday Times business section, in a piece headed: "Immigrant Britain", which applauds the business success of recent immigrants, we get this about one individual, Kuldip Wouhra:

After weeks of failing to find work, he discarded his turban, shaved off his beard, changed his name to Tony Deep and got a job as a bricklayer's mate. "I realised that I would not get a job if I wore my turban," he said. "Your religion is in your heart and mind and that is where you must protect it."

After working as a door-to-door egg salesman, Deep saved enough money to buy his first shop and start a wholesale food business. Within 10 years of start-up in the mid-1960s, it had sales of £5m. Now East End Foods is a flourishing Indian foods manufacturer with a turnover of more than £98m. 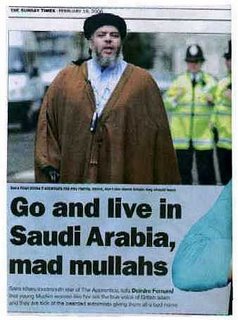 But, for the most telling comment of all, turn to the News Review section of The Sunday Times, where you will see profiled, Saira Khan (pictured), a young Muslim women and "loudmouth star" of the television series, The Apprentice.

Over the past weeks, we are told, she has watched the Muslim demonstrations following the publication of the Muhammad cartoons with mounting horror. Her message to Abu Hamza is, "Why are you living in the West? Why don't you go and live in Saudi Arabia?" and to her militant "brothers", she has the following advice:

Being a Muslim in Britain is different from being a Muslim in other countries. I am all for peaceful demonstration. If you live in this country there are democratic ways to behave. If you don’t like it, then go and live in a Muslim country.

Khan then goes on to say that she can say these things, "…because of who I am. Coming from me it can’t be seen as racist".

In fact, though, coming from anyone, it would not be racist, but a simple statement of principle. But such is the emasculation of British politics and the craven politicians who purport to represent us that it takes a 35-year-old Asian woman to articulate that which should have been said out loud for years. Instead, on this and so many issues, we get meaningless platitudes and then they wonder why we hold politicians in such profound contempt.