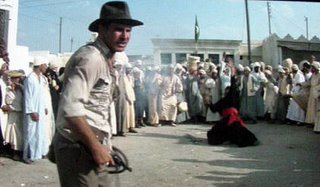 There are times when events are happening faster than the brain can absorb them, and where the arguments fly so thick and fast that they merge into a blur. That has been very much the case with the "Cartoon Wars" where, so complex and difficult do the issues appear, one yearns for the "Harrison Ford solution".

This recalls the famous scene in the 80s film Raiders of the Lost Ark, when Harrison Ford as Indiana Jones is trapped in a back-alley in an Egyptian souk. Seeking a way out, he find his way blocked by a huge Arab garbed in black, who produces a mighty scimitar and indulges in some formidable sword play. As the crowd draws in to watch the slaughter, Ford gives a weary shrug, draws his trusty revolver and shoots the Arab dead. Game over.

Fortunately, perhaps, I am not in position to impose any solution on this crisis, in which an increasing number of people are either killing or being killed, for reasons which are not sufficient.

Thus it is that yesterday, according to the IHT and others, US Secretary of State Condoleezza Rice accused Iran and Syria of deliberately seizing on the cartoons dispute to incite violence. She was speaking in Tel Aviv at a joint news conference with Israel's Foreign Minister Tzipi Livni, adding that the two countries had "gone out of their way to inflame sentiment and to use this to their own purposes." She added, "The world ought to call them on it."

Separately, in Afghanistan, US military spokesman Colonel James Yonts said there was no evidence linking Al Qaeda or the Taliban to the protests that have spread across Afghanistan, but he said Washington was investigating whether there was a common thread linking the demonstrations across the Middle East, Asia and elsewhere. "The United States and other countries," he said, "are providing assistance in any manner they can to see if this is something larger than just a small demonstration: if there is a tie to it, if there is an infrastructure, a connection."

This is a highly encouraging development as it is the first official acknowledgement that this, as the bloggers have been pointing out for days now, is a politically motivated crisis. I suppose one should be amazed that the Europeans, at the centre of events, have not made the same point but then, given their collapse of faith in the project this is unsurprising.

One still lives in hope that the dead tree media might actually pick this up and run with it, but, from the pathetic response of Anton La Guardia in what the Telegraph still rather quaintly calls his "weblog", this looks unlikely.

Until the US delivers the goods, therefore, it remains for the blogosphere to make the running, leaving the hacks trailing behind. It is thus entertaining to see David Rennie take a roasting on his own "weblog" from The Celtic Semite, who labels him a "lazy disingenuous columnist". Time for Harrison Ford, methinks.