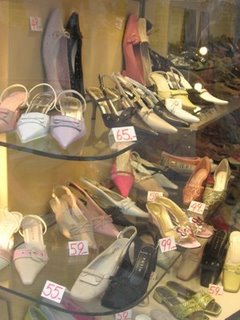 There is definitely a stench of death about an organisation that is at one so pusillanimous about confronting the torrid flow of hatred emanating from the Mad Mullahs and, on the other hand, is ready to dash into battle to extend its protectionist mantle over the decaying shoe industries of France and Italy.

Anyhow, after the "bra wars" of last summer, the IHT and many others tell us that the European Union is gearing up for a new trade war, the only type it will ever have to guts to fight.

This time, instead of bras and knickers, it is shoes – la guerre des sabots – with Peter Mandelson once again in the "firing line" as he steels himself to set out tariffs on produce from China and Vietnam which are accused of dumping cheap shoes on European markets.

At least this time, our Peter will be dealing with items of apparel with which he has some familiarity, although not the kind illustrated. For the media, though, which was clearly titillated by the prospect of being able to plaster "bra wars" over its headlines, this new contest will not have the same appeal.

Neither, it appears, is it appealing to Mandelson who, according to Emma Ormand, an international trade consultant at PricewaterhouseCoopers in London, “hates this situation" "He got caned in the bra wars and he absolutely does not want a 'Bra Wars 2,'" she says.

Without compromise, anti-dumping duties could be phased in from 7 April, two days before a general election in Italy, where competition between domestic clothing makers and their Asian rivals is a political issue. 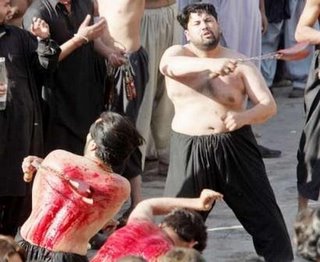 Pity though, that European politicians could not be so robust when it comes to protecting the cultural values of our society, like freedom of speech, but then that would require a degree of conviction and courage which is entirely lacking in a political élite which has lost any sense of direction or purpose. Truly, when it comes to such things, they have become les saboteurs.

Interestingly, in the Arab "culture", there is no greater insult than slapping an object or person with a shoe. Perhaps the "colleagues" should try it, although its meaning may be lost on the Chinese. Or perhaps they should adopt the strange little ritual illustrated above, as practiced by the Shi'ite branch of that wonderfully liberal Muslim religion. I am sure the Vietnamese would approve.