The Muslims we betray through appeasement 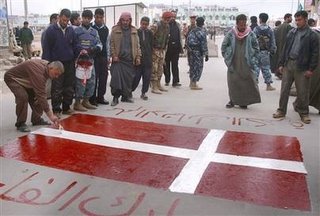 There is a report by Hjörtur Gudmundsson in the Brussels Journal based on an article in Jyllands Posten (in Danish) about a new network of Muslims being set up in Denmark, Demokratiske Muslimer (Democratic Muslims).

“About 700 Muslims have already become DM members and 2,500 Danes have expressed their will to support the network. The initiative has caused anger among the Danish imams and their leader, Ahmad Abu Laban, who have referred to the moderates as “rats.” The imams feel that they are beginning to lose their control over part of the Muslim population.”

Take the case of someone like the Iranian refugee Kamran Tahmasebi. He is a social consultant, happy with his life in a western democracy and ready to speak up to warn the Danes against the extremist (and, let’s face it, very ignorant) imams.

“It is an irony that I am today living in a European democratic state and have to fight the same religious fanatics that I fled from in Iran many years ago.”

The leader of Democratic Muslim network is the member of the Danish parliament, Naser Khader, who has been living under police protection for some time.

“Naser Khader has carried this responsibility for too long. I share his beliefs and now I want to stand up and say so. Apart from that, as a parent I feel a responsibility to fight, so that my children will not have to live under Islamist dogmas. They shall be able to live free in this country.”

These are extraordinarily courageous people, who are willing to fight, to risk their lives for what they believe in. What, one wonders, is their attitude to the likes of Jack Straw, Dominic Grieve, Hizonner Ken or the various other scared little bunnies of our political life, who betray us and our democracy as well as the individuals who are willing to stand up to the tyrants in whatever form?

The Danish Prime Minister, Anders Fogh Rasmussen, who has suspended all dialogue on the subject of integration with the various radical imams, is meeting representatives of the Democratic Muslim network today.

Meanwhile, the Committee to Protect Journalists has issued an alarmed report. Three journalists in Yemen and two in Algeria have been arrested for publishing those cartoons, though in a somewhat fuzzy version deliberately, and their newspapers closed down.

“Mohammed Al-Asadi, editor-in-chief of the Yemen Observer, has been detained by the office of the print and media prosecutor in Sana'a, according to the Yemen Observer Web site. Yemen's chief prosecutor charged al-Asadi with printing materials offensive to the Prophet and told his lawyer that the journalist was being held for his own protection.Abdulkarim Sabra, managing editor and publisher of Al-Hurriya, and Yehiya al-Abed, a journalist for the paper, were detained over the weekend for publishing the cartoons, according to news reports and CPJ sources. An arrest warrant has been issued for Kamal al-Aalafi, editor-in-chief of the Arabic-language Al-Rai Al-Aam.

The Ministry of Information has revoked the publishing license of all three papers. CPJ sources said the journalists were held under Article 185 of the penal code that allows for detention for seven days, which a court can extend for a further 45 days. Under Yemen's press law, if the journalists are convicted of offenses against Islam they could be jailed for up to one year. The journalists could face additional charges under the penal code.

In Algeria, authorities closed two weeklies and arrested their editors for printing the drawings on February 2. Kamel Bousaad, editor of pro-Islamist weekly Errissala, and Berkane Bouderbala, managing editor of the weekly Essafir, were detained last week, according to news reports.

The editors face charges under Article 144 of the penal code, which provides for imprisonment of up to five years and heavy fines. The BBC reported that the magazines have been critical of the Danish drawings and printed them to explain why they had sparked outrage in the Muslim world. The drawings were deliberately fogged. According to BBC, the two Arabic language magazines have moderate pro-Islamist views and print only a few thousand copies a week.”

Oh well, that’s all right then. Only a few thousand copies. Who is going to notice their absence? I am surprised the BBC, whose website managed to refer to one of the fake pictures as being an original Danish cartoon, even bothered to mention it.

But this is serious for anyone who believes in freedom and free expression. So far as we know these journalists are no worse or better Muslims than anyone else. They do, however, seem to believe that newspapers should be allowed to report on stories and, also, that Islam will not be destroyed or undermined by a dozen or more cartoons any more than it was destroyed or undermined by Persian miniatures or medallions worn by the Janissaries.