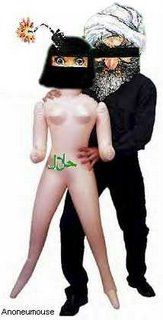 I republish this from the Independent, without comment. However, our picture, from Anoneumous, might be taken as expressing a view (pun intended).

Not 24 hours later, she finds herself on the front line of Islamic protest after Muslim leaders discovered that the range includes a new blow-up doll, called "Mustafa Shag". Unfortunately, Mustafa was one of the names given to the Prophet Mohamed. Bestowing it upon, in the words of its catalogue, "an inflatable escort for your hen-night adventures" is considered highly offensive.

The Manchester Central Mosque has already written to the firm, calling on it to withdraw the product, right. "You have no idea how much hurt, anguish, and disgust this obnoxious phrase ["Mustafa Shag"] has caused to Muslim men, women and children," reads their letter. "We are asking you to please relent on compassionate grounds, and have our Most Reverend Prophet's Name "Mustafa" (Peace Be Upon Him) and the afflicted word 'shag' removed as soon as possible."

Ann Summers was last night examining options, though its chief executive Jacqueline Gold was reluctant to withdraw the item from sale. "We don't want to offend, but this feels like political correctness gone mad," she said. "If anyone has a better name for a blow-up doll, please let us know."

Offers please, on a postcard to…