The EU weighs in 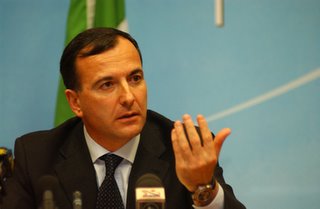 Having been largely sidelined in the War of the Danish Cartoons, the EU is limping on to the battlefield. As the poorly attended riots continue in various countries (the Nigerian ones have excited Christian counter-riots and are threatening to develop into a civil war with the connection to the cartoons being visible only to MSM journalists), there have been developments in the EU.

As Gareth Harding of UPI reports, Franco Frattini, EU Commissar for Freedom, Justice and Security spoke at a conference organized by the International Federation of Journalists and the International Freedom of Expression Exchange.

Let us bear in mind that the EU maintains in every document that at the roots of its existence lie the European ideas of freedom and tolerance. Of course, there is the problem of whether the EU exists because it is an expression of those ideas or because it is needed to overcome the many centuries of European history when they were… ahem … ignored. In particular, of course, we have a difficulty with the twentieth century. Was it the pinnacle of European belief in freedom or the nadir of European intolerance and monstrous oppression? Perhaps, if the EU could sort that one out, it would have some sensible views on the War of the Cartoons.

Frattini is as muddled as any of them. On the one hand, of course, he does not really like all this violence and threatened violence.

Well, that seems clear enough. He then added:

“Freedom of expression must be defended, possibly most of all when ideas shock or disturb.”

“I would not have published those cartoons. It should have been clear given the broad assessment of context and circumstances.”

Given that the cartoons were published in September and neither the context not the circumstances became difficult till the end of January, it is hard to understand what the Commissar really had in mind. Anything about the Imam Abu Laden’s shenanigans, for instance? Or the fact that very many Muslims do not support the extremists?

“Frattini’s position, which also appears to have the backing of EU foreign policy chief Javier Solana, is that journalists must impose a form of self-censorship in order not to offend the sensibilities of Muslims, and other religious groups. ‘Any publication and republication must take into account the international political context, in particular the Muslim world,’ said Frattini, pointing out that it was ‘unwise’ for European papers to republish the cartoons just three days after the victory of the militant Islamist group Hamas in Palestinian elections and following recent remarks about Israel and the Holocaust by Iranian President Mahmoud Ahmadinejad.”

So much for freedom of the press. If it looks like there might be trouble anywhere in the world, exercise self-censorship. If people are making nasty and unacceptable comments … hide.

It would have been fun to have Frattini and his cohorts around in the 1930s or, come to think of it, the 1970s. Mr Hitler is annoyed. Please do not make matters worse by publishing cartoons. Don’t upset those Soviet leaders, please, please. Exercise some self-censorship while you bear in mind the international situation.

Unsurprisingly the IFJ and the American Cartoonists’ Rights Network waded in against Frattini. Robert Russell, president of the latter even asked whether Picasso should not have painted “Guernica” or Goya not drawn his cartoons or Theo van Gogh not made his film.

Not sure what Signor Frattini’s answer would have been to the first two of those questions but I would guess that he believes Theo van Gogh to have brought it all upon himself by not taking the context and circumstances into account.