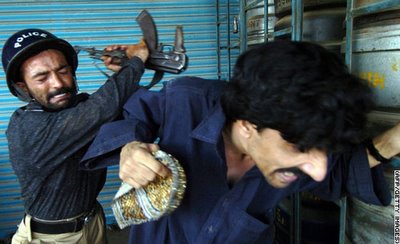 I could not resist the photograph, one of the latest from a batch showing the rioting in Pakistan over the cartoons. It makes quite an interesting contrast with the pussyfooting of our own plods, who are more concerned with how they look on Al Jazeera (except when it's pro-hunting, or anti-globalisation protests - see below) than actually doing the job for which they are paid. 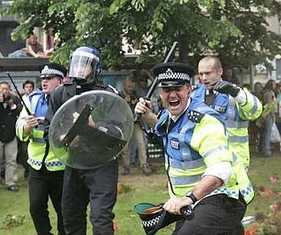 However, after the carnage in Libya, where eleven died riots over the cartoons, the focus of the religion of peace now shifts to Nigeria where, according to CNN, sixteen people have been killed and, in a unique display of religious tolerance, no less than eleven Christian churches have been torched. At least it makes a change from KFC restaurants, I suppose.

The deaths apparently occurred after the emissaries of peace took to the streets to spread their messages of love and tolerance in the Muslim-dominated northern Nigerian cities of Maiduguri and Katsina.

Maiduguri bore the brunt of the violence, and it was there that fifteen people were killed and the eleven churches were torched, with 115 people being arrested. There also were reports of attacks on businesses owned by Christians, as Muslims swarmed through the city center with machetes, sticks and iron rods. One group even threw a tyre around a man, poured petrol on him and set him ablaze.

What would civilisation do without such a peace-loving religion?