The sheep may safely graze 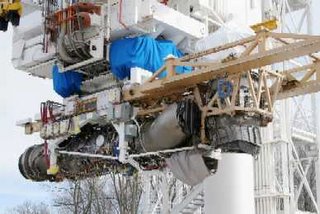 "Bush scraps Rolls-Royce deal despite Blair pleas" headlines The Times today, flagging up a story which has been doing the rounds since early January, and which has been covered fully in this blog.

This is the "hare" that the second engine for the Joint Strike Fighter is to be axed, as story that is also run in The Telegraph, as "US snubs Blair over Rolls-Royce engine deal" and in The Independent, under a similar heading: "Bush snubs Rolls over fighter engine".

The story was also run by The Business over the weekend, this time under the headline: "Blair failed to save £1bn Rolls-Royce US contract".

Such repetition tends to confer a degree of authenticity to the reports. After all, the can't all be wrong, can they? But, indeed, they can and they are. This is a classic example of the sheep-like mentality of the media, when all the witless hacks huddle together for comfort and run with the same story, in the knowledge that, if it is wrong, then no-one is out on their own.

It also demonstrates a woeful ignorance on the part of the British media as to how the US political system works – rehearsed in detail in this posting and its pathetic parochialism. This is not primarily a Roll-Royce contract – the major contractor is in fact the US defence giant, General Electric.

But, to get beyond the fluff, you have to read the "small print" in the Reuters’ report, on which the dead-tree sellers based their own story. The report cites GE spokeswoman Deb Case, who says her company was continuing to work on the programme and had an engine test scheduled soon. "It's not a final decision," she says, of the president's budget proposal, noting that Congress controlled the budget.

Richard Aboulafia of the Virginia-based Teal Group is also cited, saying the Pentagon may have targeted JSF in the hope that Congress would reverse the cut. He predicted funding would be reinstated.

And ain't that the truth. As we have pointed out before, this is the Pentagon playing games, putting up a sacrificial "saving" which they do not want and they know Congress will not approve, a ploy to keep their larger budget intact. Anyone who has worked in government has played that game - it is one of the oldest in the book.

The worrying thing is that, here it is so transparently obvious that the MSM really have lost the plot. How can you possibly trust it with other issues, even when the background is not so transparent?