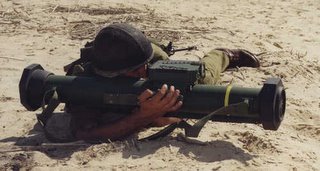 It was only at the end of January that we reported - in our continued but lonely crusade on the steady Europeanisation of UK defence equipment – the MoD’s decision to buy the Seafox anti-mine system built by the Bremen-based Atlas Elektronik GmbH, in preference to the Archerfish, built in Portsmouth by BAE systems.

Now, sneaked out while the world – and this blog - was concentrating on other things, another MoD contract has been announced. This one is for an "Anti-Structures Munition," a typically po-faced bureaucratic name for a "bunker-buster bazooka", as Defense Industry Daily succinctly puts it.

In case you hadn't already guessed, the contract – worth £40 million – has been awarded to a European defence contractor, this time the German firm, Dynamit Nobel Defence (DND), based in Burbach, near Frankfurt.

This was chosen in preference to a weapon produced by the Swedish firm Saab Bofors Dynamics, a wholly-owned subsidiary of Saab AB which is, in turn, 20 percent owned by our own BAE Systems (UK). Furthermore, the BAE Land Systems division has worked closely with Saab on a range of man-portable missiles. Once again, therefore, the MoD has turned its face against the British interest and BAE Systems – in favour of a German firm. 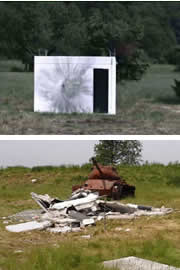 No pictures or details of the new "Anti-Structures Munition" have been provided by either Dynamit Nobel Defence or the MoD, but it is believed that the weapon will be based on the Panzerfaust 3 munition already produced by the company, adapted specifically to enable infantry to demolish structures without recourse to artillery or airstrikes (with devastating results – see picture, right).

Now, however, the plot thickens. Separately from the MoD, the US Marine Corps – with the US Army to follow – is running a competition between two companies for an advanced version of a "bunker-buster bazooka".

One of the contractors is General Dynamics, which has teamed with the MoD winner, Dynamit Nobel and the Israeli Rafael Armament Development Authority. Previously, the Israeli and German firms developed a joint "bunker-buster" known as Matador AS.

The other contractor is Lockhead Martin, which is also working with an Israeli company, this one Israel Military Industries. They are basing their system on the IMI's existing Shipon design (pictured above left).

From this, it is quite clear that Israel, not Germany, is the technology leader. Furthermore, as the current winner of the MoD contract is working with a US and an Israeli firm to produce a more advanced weapon, it would seem premature for the British government to buy an existing weapon.

Apart from the alternative of supporting the company with the greatest British interest, a more logical option might have been to wait until the US competition was concluded and fall behind the winning design – except that this will almost certainly be US-manufactured.

Given UK involvement at an early stage, however, there could have been a possibility of negotiating a manufacturing license deal - as we have with other US-originated weapons projects – possibly also with some stake in the development. Whatever else, it is difficult to see the military logic in the MoD buying the German weapon at this stage.