Another transnational initiative runs into trouble 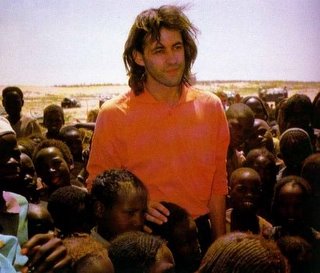 The Globalisation Institute reports approvingly that St Bob Geldof has joined Transparency International to head a study group that will look at aid delivery and how to tackle corruption. As readers of this blog know, we take the view that the first thing to do if you want to tackle corruption is cut back aid to non-existence. Unfortunately, even Transparency International is unlikely to acknowledge that.

As I recall, one of the policies St Bob advocated vociferously and tearfully, one that was adopted at the ill-fated G8 meeting in Gleneagles, was the cancellation of debts of various poor countries, most of which were in Africa.

At the time there were many warnings about this idea, not least from African and South-East Asian writers. This was seen as an inducement to international fecklessness; a discouragement to countries that had tried very hard to pay their debts by reforming parts of their economy; and an unlikely help to the people of those poor countries.

In fact, several of the countries that were lining up to have their debts cancelled, such as Uganda had already had a “one-off” debt cancellation. Now they were going to have another one. And, presumably, another one in a few years’ time.

According to Richard Rahn in yesterday’s Washington Times, a scandal is brewing in connection with the agreement being put into practice. Well, so what, you might say. Another dog bites man story. This one is quite interesting.

One of the countries on the list of those that wants its debts written off is the Republic of Congo (capital Brazzaville), which just happens to be one of the most corrupt states even in Africa.

The Sunday Times reported last week that its president, Denis Sassou Nguesso, ran up a £169,000 bill in a New York hotel during the last UN summit, £100,000 of which he paid in cash. His country, in the meantime, is rated among the poorest in the world. Clearly, what the West needs to do is to give the man more money to spend in nightclubs and other, more questionable, establishments in the United States.

Whereas, as Richard Rahn points out:

“Most serious analysts of the failures of development aid, including a number of government commissions, not only identified corruption in recipient governments as a reason the aid programs failed but, in fact, found the projects actually fueled additional corruption and increased the plight of the people. The only responsible course the donor nations could take was to make future aid and debt writeoff conditional on first cleaning up corruption.

Hence, the IMF, World Bank and the donor nations were charged with certifying that the debtor nations had cleaned up their acts before relief was provided.”

The Republic of Congo has done nothing of the kind. There is no proper budget, no transparency, no way of finding out where the money goes until it turns up in a hote in New York.

“The independent auditors, KPMG, cannot certify Congo's accounts because the country will not provide access to books and records; and it appears about a third of the oil revenue has not been properly accounted for. Congo's prime minister admitted after the London court judgments use of "unorthodox" accounting procedures (i.e., theft).”

There is a good deal of noise from organizations such as Global Witness not to write off Congo’s debt until there is some evidence of improved behaviour.

On the other hand, there is also a great deal of pressure from certain countries to go ahead and certify the Republic of Congo of being worthy of a debt cancellation and, if needs be, increased aid.

Here is the crunch. Guess who is leading this campaign?

“To no great surprise, the French are behind the effort to certify Congo, because it is a French client state, the French oil company "Total" lifts most of the oil, and France has other strong commercial and banking interests there.”

So we sit back and wait to see whether the United States government, the European countries and organizations such as the IMF will live up to all the fine words about the need for honesty and anti-corruption drives.

Or will they, once again, succumb to the “we must do something” mentality and hand over large amounts of taxpayers’ money to be used as seen fit by the fun-loving president of the Republic of Congo and help French commercial and political interests.