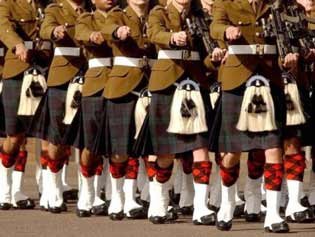 Not a murmur could be heard when the British Army decided to buy Austrian-built MAN trucks for its supply fleet, or Italian-built Panther liaison vehicles. That the new army is to be supplied with Swedish-designed armoured vehicles, fitted with French-built guns firing ammunition manufactured in France is a mere detail.

Who cares that our anti-battery radar is made in Germany, that the air-to-air missiles to equip the four-nation Eurofighter are French designed, as indeed are the missiles fitted to our Type 45 destroyers? And what does it matter that our new "bunker-buster" missiles are German, as indeed is the Royal Navy's mine-counter-measure equipment?

Why should we be bothered that we no longer have a capacity to design and manufacture even the rifles with which our troops go to war, that the bullets they fire are contracted out to foreign firms and the shells are made in Germany, while the troops themselves will fight in Chinese-made uniforms?

But there are limits chaps and, according to The Scotsman, those limits have been reached. "Shock! Horror! Probe!", screams The Scotsman: "Scots super-regiment to be kitted out in foreign kilts".

And right behind the newspaper is Jeremy Purvis, Borders MSP, who says, "The kilts are clearly going to be sub-standard. Now there will be different cuts and shades on parades and it will be an embarrassment. The ceremonial Scottish wear of kilts and trews should absolutely be made in Scotland."

In detail, it appears that the British Army has lowered the standards required of ceremonial kilts for the new amalgamated Scots regiment so that they may be manufactured from cheap tartan made abroad. In "an effort to drive down costs", the Ministry of Defence has announced it is putting the contract to produce tartan for the amalgamated Royal Regiment of Scotland up for tender.

It is also, says The Scotsman, lowering the standards of the tartan's quality to allow other companies producing cheaper, lower-grade cloth to compete against the expertise of Borders textile companies. The MoD has launched a competitive tender allowing any manufacturers to compete for the contract of 5,000 kilts, estimated to be worth £300,000, for the new regiment.

And there you have it. It is perfectly all right to have our armed forces totally in hoc to foreign suppliers, to such an extent that we cannot so much as put a foot ashore on a foreign land without their governments' agreement. But even think about having Scottish regiments in foreign-made kilts and all hell breaks loose.