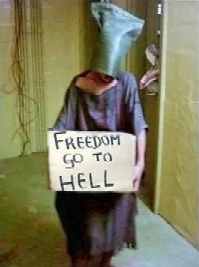 A decision by an Australian television network to release more images of detainee abuse at Iraq's Abu Ghraib prison has set off a debate over the willingness of many media organizations to carry the gruesome pictures when they chose not to publish controversial cartoons depicting Mohammed.

In the meantime, this dramatic new photograph has emerged, certified as absolutely genuine by Danish imam Abu Laban, showing a prisoner being forced to carry a humiliating banner which clearly contradicted his innermost religious beliefs.

In London, UN Human Rights Commissioner Louise Arbour told the BBC that she was scandalised by the picture, which conveyed a slogan that no genuine Muslim could ever consider carrying unless forced, under threat of torture, by these filthy American, capitalist pig dogs, which only went to prove that these despicable lackeys…

The BBC later apologised for an unscheduled break in transmission.