Another day, another failure… 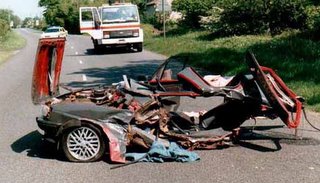 When it comes to long-term strategies, the EU is a by-word for failure, its much-vaunted Lisbon strategy having degenerated into a hollow joke, inviting cruel sniggers every time it is mentioned.

Less dramatic – and considerably less publicised - is the EU's European Road Safety Action Programme, launched with a somewhat subdued fanfare in September 2001 with the aim of halving the 50,000 road traffic fatalities in the EU 25 to an annual rate of 25,000 by 2010.

Now, halfway through the period, the EU commission has published its mid-term review, claiming that improvements had been achieved, in that the number of road fatalities had been reduced by by 17.5 percent during the past four years.

On the other hand, it has been forced to admit that it was not likely to achieve its 2010 goal. "At present rate," the commission concedes, "road deaths in the European Union in 2010 are likely to stand at 32,500".

Interestingly, far from enjoying reduced accident rates, in some member states, they have actually increased. The culprits area all new accession states, with Cyprus leading the way, but Poland, Hungary, Lithuania and the Czech Republic all show significant hikes in their death tolls.

And, despite the camera-driven reign of terror on British roads, with the obsessive focus on speed, the continued downwards trend in road deaths has slowed, the UK delivering a six percent decrease compared with an EU25 average of 14 percent, the latter figure taking in the member states where casualties have increased.

Having come late into the field, despite road safety having become an EU competence with the Maastricht Treaty in 1990, the EU has so far promulgated relatively few laws (see here) but, it warns, the Commission "will now give consideration to additional measures within the framework of the mid term review of the Transport White Paper". You have been warned.

The photograph, incidentally, shows what is left of a Ford Fiesta XR2. The driver survived the crash.