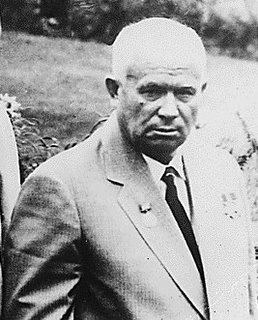 Fifty years ago, on February 25, 1956, Nikita Khrushchev, the First Secretary of the Soviet Communist Party, mounted the podium to give his report on the final, closed session of the party’s Twentieth Congress. It was, to put it mildly, an unusual report.

Instead of the expected boasts and admissions of failure (to be blamed on someone else) Khrushchev delivered a four-hour long speech in which he denounced what he first referred to as the cult of personality that had grown up around Stalin. In effect, he denounced Stalin and some of his crimes.

The speech concentrated on the purge of the party and the destruction of the Communist cadres through “glaring violations of revolutionary legality”. Little was said about the many millions of other victims but there were references to the destruction of the agriculture (and by inference, of the peasantry), to Stalin’s grave mistakes in the Second World War (the full horror of that is still largely unknown in Russia), the deportation of whole nationalities at the end of the war and the paranoia of the doctors’ plot.

Like a good Soviet apparatchik, Khrushchev made no references to the largely anti-Semitic nature of the second purge, which was gathering momentum as Stalin fortuitously (or, perhaps, not) died. But he did quote Stalin’s instructions on how to extract confessions from the various highly placed medical specialists and their assistants, all of whom had been arrested: “Beat, beat, beat and beat again”. Few survived.

It is said that the speech produced an unprecedented effect. People fainted in the hall. Supposedly secret, the speech was passed on to some Soviet and East European organizations. It was also smuggled out by one or two of the foreign Communist leaders who had been present. (One, the leader of the Polish party had a heart attack and died.)

As an analysis of the Soviet system or, even, of Stalinism, the speech was inadequate. It concentrated on the crimes committed against the Party, leaving out the other victims. It created the illusion that the whole monstrous system had been created by Stalin and a few of his henchmen, some of them still around and, by a strange coincidence, Khrushchev’s rivals for power.

There was no reference, for obvious reasons, to Khrushchev’s own involvement in the ferocious Ukrainian purges or the use of slave labour to construct many new parts of Moscow and, above all, the Moscow metro.

Still, with all its inadequacies, the speech was stunning and its effect felt all over the world. It caused the Sino-Soviet split that followed in 1960. Closer home, it created disturbances in Eastern Europe that culminated in the Hungarian revolution that autumn. Though put down quite ferociously, the after-effects remained. Never bright confident morning again.

In the Soviet Union there was an attempt to losen the rules. The small measure of artistic freedom that we know about came, in fact, after the second, even mosre shattering, as it gave more details, anti-Stalin speech at the Twenty-Second Congress of 1961.

People had been gradually released from the gaols and the gulag since Stalin’s death. Now the process was speeded up though it was never a complete one. Other people were arrested. Some of those “illegally repressed” were rehabilitated and they or their families were given certificates to that end. Most, on the other hand, had to wait for several decades.

There was a half-hearted attempt to investigate the murder of Kirov (known to all to have been done on Stalin’s orders), which had triggered off the Great Terror of the thirties but it came to nothing. It was finally completed and Stalin’s role admitted under Gorbachev.

The greatest effect of the speech was in the West. There was uproar in all the Communist Parties with hundreds leaving, feeling that they had been cheated and humiliated.

Others, who had known some or all of the truth, felt cheated that it had now come out and their word would no longer be accepted, their honesty doubted. For years they had denied the horrors of the Soviet system and fought to destroy the good name of anyone who had tried to tell the truth. (These are the people nowadays described as innocent vicitms of McCarthyism.)

The good times were over – they would have to try that much harder and weasel their way through words that much faster to be believed. Fortunately for them, the Left, after the first shock continued to prefer the Communist explanation for everything.

An even bigger problem faced the fellow travellers, the people who had mindlessly accepted all assurances, who had used their authority to support what was now acknowledged to be the truth. Some never quite recovered. Others, again after a decent interval, found themselves another foul murdering regime to be a fellow traveller of.

It took another three decades for the Soviet system to collapse. Communism has not gone yet and the full truth about it has not been told in Russia and several other countries. Even in the West the reluctance to acknowledge the horror of the other totalitarian system is prominent as we cling ever more despairingly to the idea that nothing could have been as bad as Nazism and no crime as vile as the Holocaust.

Yet the work that was started in a somewhat incomprehensible fashion by Nikita Khrushchev fifty years ago has to be completed or we shall never rid ourselves of the incubus of the twentieth century.