It is through a vigorous but peaceful dialogue of opinions under the protection of the freedom of expression that mutual understanding can be deepened and mutual respect can be built. I am fostering and will continue to foster dialogue between cultures and with religions. 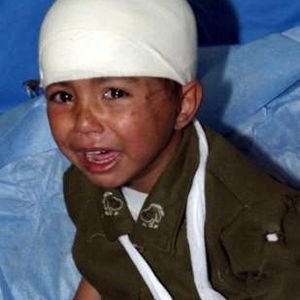 As Iraqi politicians debated the formation of a government on Wednesday, the Pak Tribune reports, a wave of gun and bomb attacks killed at least 16 people in the capital, including five children.

Three children were killed and two wounded when a bomb exploded outside the Karama primary school in the Saydiyah neighbourhood of southeastern Baghdad. A second roadside bomb killed two children and wounded four more in the Fadhl neighborhood.

Six police officers and a civilian were killed in separate attacks in Baghdad, and in what has become an almost daily event, police found the bodies of four Iraqis who had been handcuffed and shot in the head. 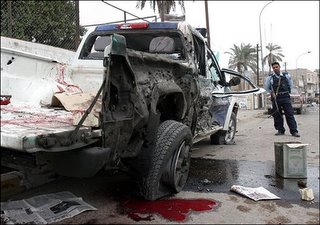 You do not, of course, get this sort of information from the BBC, which is still wetting itself with excitement about the "new" Abu Ghraib prison photographs, taken three years ago, having led its news bulletins this morning with the cod UN report about "torture" in the Guantanamo detention camp and devoted most of the lunch-time bulletins to discussions about the report.

Are we so inured to the carnage that what appears to be the deliberate targeting of children by terrorists is not thought worthy of even a passing mention on the news broadcasts? What of our values when the contrived fury of Islamists over the publication of some relatively inoffensive cartoons captures the world's headlines?

More to the point, how can we even have a sensible debate when the BBC and its fellow-travellers cannot even bring itself to label as terrorists the low-life scum who murder children and other innocents, and insists on calling them "militants", while the EU and the rest of the tranzies rush to appease the scum who, in the name of their dysfunctional religion, claim the moral high ground?