Did we ever think we'd see this in Britain? 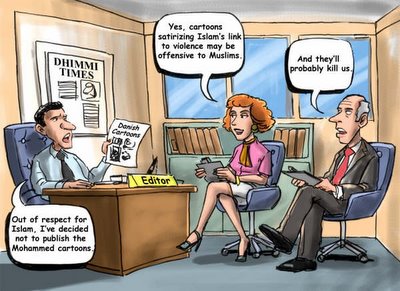 The Lib-Dims are celebrating a famous victory up in Scotland and we must let them have their triumph. (Is the Boy-King wondering about his strategy yet? Or has he comforted himself with the thought that Conservatives “never” do well in Scotland? Because, I have news for him. They used to win seats up there.)

On another front they are not so chippy. The magazine the Liberal, has put up one of the Danish cartoons on its website and then took it off again, having been told by that fine body of men, “senior officers at Scotland Yard” that the safety of its staff cannot be guaranteed. Well, presumably, too many officers are out there protecting demonstrators who are calling for beheading and annihilation. Can’t spare the men or women.

So, despite all its fine words before about not colluding in self-censorship, the magazine took down the cartoon, putting up a white square instead with the word “Censored” across it. But censored by whom?

Meanwhile, the Spectator tells us pompously in its printed leader:

“We are not publishing the cartoons which caused such offence after they appeared in Denmark, and we believe other British newspapers are right not to have published them. There is a history of irreverence at The Spectator, but there is a difference between irreverence and causing gratuitous offence. Why humiliate members of another faith by ridiculing what they hold most sacred?”

The somewhat more courageous website, Spectator Live, did put up one of the cartoons and was ordered to remove it by Andrew Neil, the publisher of the Spectator. In other words, they are not publishing the cartoons because they are afraid. Fair enough, but why not say so?

Still, their punishment is coming:

“Meanwhile, Charlie Hebdo, the French satirical weekly that yesterday published a cartoon row special edition featuring new caricatures of the prophet Muhammad and other religious figures, expects to more than double its sales.

Charlie Hebdo usually has a print run of 140,000 copies, but has printed extra copies this week and estimates that sales will top 400,000.”

The threat by the French Council of Muslim Faith (CFCM) to take them to court is likely to push the sales figures up.

With all those specious excuses and with endless air time given to self-appointed spokesmen who inform us that Britain belongs to Allah, the British Media does not appear to be on the right side of the barricades.