I thought I was joking 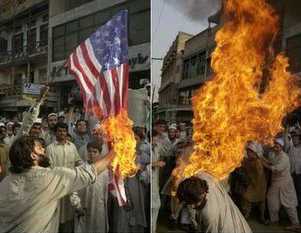 When, last week, I suggested that the EU commission, rather than seeking childproof lighters, instead sought to make them Muslim-proof, I thought I was joking.

However, to judge from this photograph from Newport City blog, it seems that this could be a fruitful area for commission intervention.

On the general perils of flag-burning, England Expects has a few words of caution. Clearly, we need a directive here as well… or perhaps a CEN standard for burnable (is there such a word?) flags.