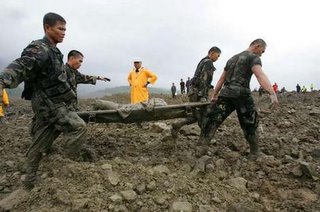 The Philippine mudslide, despite the horrifically high casualty rate, is already sliding down the scale of newsworthy stories. Nor has there been any comment, to my knowledge, about the fact that the slide might have been predictable after two weeks of rain and were there any plans to evacuate the villages in the way. How different from the nasty, gloating and completely misleading reports about Katrina.

Apparently, now 11 other villages are being evacuated. And what of the international help, so badly needed?

Well, the United States has sent two warships, 17 helicopters and 1,000 marines as well as $100,000 worth of disaster equipment immediately to the Philippine Red Cross. Australia has offered an immediate 1 million Australian dollars to be made available also through the Philippine Red Cross “to assist with the most immediate tasks of evacuating survivors, setting up shelters and trauma counseling, as well as meeting the more basic needs of food, clothing and related emergency items”.

Taiwan has donated $100,000, though it is not clear how the money is to be used and distributed. Japan is preparing to provide emergency relief as soon as the Philippine government makes it clear what is needed.

The UN? Well the UN is sending a disaster assessment team. Why change the habits of a lifetime? The International Red Cross has launched an appeal for funds – shades of the post-tsunami efforts. To be fair, it is also sending emergency trauma kits, body bags, flashlights and other useful equipment.

As the Philippine army is involved in the operation we can but hope that there will be no repetition of the scandalous behaviour of at least one NGO in post-tsunami Indonesia, when they refused to let the army any bodybags, face masks or gloves, badly needed for the digging out of bodies. They did not approve of the army, you see.

And the EU? The organization, whose existence is supposed to be entirely in order to spread goodness and benevolence round the world? Errm, we haven’t heard anything from them or any of the member states. Oh no, wait a minute. Spain has expressed sincere condolences.