We don't do action 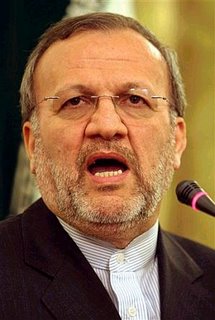 In a clear snub to the European Union, Iranian foreign minister Manouchehr Mottaki has today announced at a press conference in Tehran that Iran will no longer conduct negotiations over its nuclear programme with the EU-3. "The phase of negotiations with the EU trio is over," he says.

This is according to Ankronos International, which cites Mottaki declaring that: "From now on, we will talk to the whole of Europe, but on a bilateral basis. We will resume discussions with individual countries on the basis of shared interests and in mutual respect, without preconditions."

As for the agenda, the foreign minister is quoted as stating that, "The next round of talks with a European partner should start with ways for Iran to enrich the uranium it needs run its nuclear power plants."

This follows on from Mottaki's "whirlwind visit" yesterday to Brussels, when he talked to Javier Solana, spoke in four press conferences and addressed the foreign relations committee of the EU parliament.

Such reports of that visit that we got from the MSM – for instance here - mainly featured a call by Mottaki for an end to the violent protest over cartoons of the Prophet Muhammad, which is a bit rich as the Iranian protests have been entirely orchestrated by the state.

Clearly, though, this was grandstanding for public consumption, and whatever discussions that went on behind the scenes were clearly not successful, with Mottaki now – in demanding bilateral talks - effectively refusing to recognise the EU as a representative body

The Brussels talks themselves were a risk for the EU, with Israel, according to the Jerusalem Post expressing "disappointment" that the EU was holding them at all, officials saying that this was the time to disengage from the Iranians, not enter into a dialogue with them. The talks, said the officials, represented "negative movement" because they created the impression among the Iranians that they still had some "wiggle room."

To add to the EU’s discomfort, the European Jewish Press reports that the European Jewish Congress is to file a complaint urging the International Criminal Court in The Hague to bring Iranian president Mahmoud Ahmadinejad to trial for incitement to genocide.

The EJC initiative was adopted by an extraordinary meeting of the EJC's general assembly meeting Sunday in Vienna, Austria, which is doubly embarrassing for Austria, current holder of the EU presidency, contrasting as it does with the jailing for three years of 67-year-old David Irving for holocaust denial.

And, showing up the EU still further, EJC president, Pierre Besnainou, who represents 40 leaders of national Jewish communities in Europe, is promoting a resolution in the EU parliament calling for the Iranian President to be made persona non grata ad personam, within the 25 EU member states. "None of the member states should invite the Iranian president," Besnainou says. "We are asking the EU rather for action than declarations."

That really puts the EU on the back foot. In its bid to be all things to all men, it is now getting flak from opposite sides of the divide, where its declarations no longer impress. As for action… well, that's another matter entirely. As Barroso might have said, "we don't do action".