French to the rescue 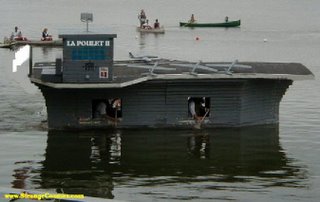 According to the Independent, and others, the UN is today holding a donor’s conference in Brussels, in an attempt to raise $681 million to deal with the "forgotten crisis" in the Congo.

The UN also wants the European Union to provide troops to reinforce the "embattled" UN peacekeeping force of 16,000 men based in eastern Congo.

This story was faithfully repeated on the BBC Today programme this morning, with Hillary Benn gushing forth good intentions and £60 million of other people's money.

But what no one thought to mention is that the first $20 million of the funds donated will have to go the Belgian government to reimburse it for all its lost kit.

However, help is at hand. We learn that the French are to despatch their newest carrier to the region, to aid the "embattled" peacekeeping force. Note the very latest in UAV technology lined up on the decks, and the eco-friendly propulsion system.