A man we could do without 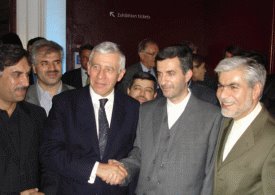 The Business has managed a singular achievement today in recruiting an American writer, James Forsyth who, in writing about Jack Straw and his wholly malevolent role in the Iran crisis, seems to display some understanding of British politics.

The piece, entitled The Straw that won’t break Tehran’s back, argues that, to stop Iran from developing nuclear weapons, the West must convince the authorities in Tehran that it is prepared to use force.

But, writes Forsyth, one politician keeps getting in the way of this strategy and making it seem that force would never be even an option: Jack Straw, the UK Foreign Secretary, whose words keep reassuring the Iranians that they can do whatever they want.

The thesis, which suggests that Straw is playing to the anti-war elements in his own party, and his shrinking support in his own constituency, is well argued and convincing, and well worth a read.

In addition, it is also worth remembering that Straw is a man who, at best, can be described as having very poor judgement, viz his recent visit to Tehran. It was while there that he shook warmly by the hand Esfandiar Rahim Masha'ie (pictured), otherwise known as “the Butcher”, for the cruelty he exhibited in Tonekabon in the 1980s.

Forsyth suggests that Blair should reshuffle Straw at the earliest opportunity. Until he is removed from the foreign office, it will be impossible to persuade Iran president Ahmadinejad that the West is serious about him acquiring the bomb, thereby making armed intervention more likely.

That is too kind a fate for Straw, but at least it would be a start. He is truly a man we could do without.