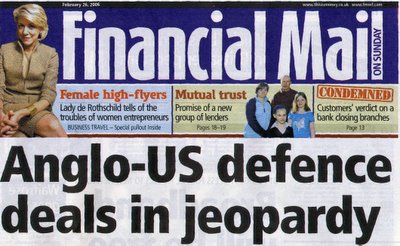 In complete vindication of our piece posted on 25 January, when we reported that the UK was getting set to dump the US Joint Strike Fighter, the Financial Mail today leads its front page with "Anglo-US defence deals in jeopardy".

Britain, reports the Mail, "may consider buying up to 150 French fighter jets for two new-generation aircraft carriers scheduled to go into service with the Royal Navy in 2013".

Never mind that the in-service date is a tad optimistic, the substance of the Mail piece is that the "unexpected verbal offer" to buy Rafale marine jets "came on 24 January when defence secretary John Reid met his opposite number, Michele Alliot-Marie, for crucial talks in London".

This is precisely the event which we reported – an event ignored almost completely by the MSM – when the French unexpectedly caved in on the price for using the UK design of the proposed carriers, actually offering more than the asking price.

We also reported at the time that the deal was completely unexpected by the officials involved in the talks and concluded that "fairy-tale endings like this do not happen in real life." There was, we averred, "a very strong smell of a side-deal which has not been disclosed." 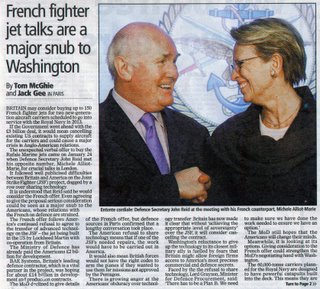 And now it has come to pass that there was a side-deal, or the makings of one – exactly as we suspected – with Reid agreeing to consider the offer made by Alliot-Marie. Says the Mail, "even agreeing to give the proposal serious consideration could be seen as a major snub to the Americans, whose relations with the French on defence are strained".

Of course, if the MSM had had its wits about it (stop giggling at the back), it would have put two and two together, not least the otherwise inexplicable manoeuvrings of Tony Blair on the second engine for the JSF, which looked to us like he was struggling to invent an excuse for refusing to buy the aircraft. 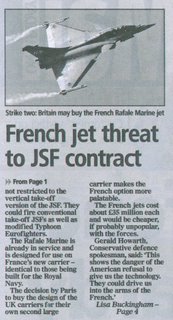 One thing - amongst several – the Mail gets wrong is its claim that the UK will now consider cancelling the JSF contract. As it stands, of course, no production contracts have been signed. Completion on these is scheduled for November of thereabouts. Thus, the UK government is playing its options in a "window of opportunity" between now and then, when it must make a firm commitment to the JSF or withdraw from the project.

Cited by the Mail as one of the reasons why the UK might wish to pull out is the continuing problems with technology transfer, the Americans being reluctant to release technology to the British for fear that it might end up in the hands of the French and thence be passed to the Russians and the Chinese.

This is an issue we have rehearsed many times on this blog, most recently here, but if you need any more reasons why the US is entirely justified in its suspicions, The Business provides more evidence of the growing closeness between the Russian and French Aviation industries.

This must be read in conjunction with our story on 22 August last year when we remarked on the tie-up between EADS and the Russian MiG company, aimed at developing high-performance UCAVs. Knowledge of JSF stealth technology would, of course, be invaluable to the French in progressing this project.

All together, therefore, the report in today's Mail is of considerable importance and it says something that, although it is given some prominence, it is still confined to the business pages. This points up the utter inability of the MSM to understand the significance of what is going on, an inability which is reflected in political (and especially Conservative) circles and, unforgivably, much of the Eurosceptic community. 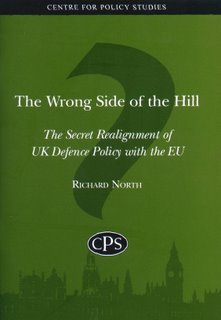 Blinded by current – what might be called "legacy" - commitments, where our armed forces are working in close harmony with the US in the Iraqi and Afghan theatres, they fail to realise that the gradual realignment in defence procurement, detailed in my CPS pamphlet Wrong side of the hill, sets the tone for the future. Blinded by the short-term, commentators are failing to see the longer-term trends.

That longer-term trend is a closer alignment with European Union member states, and especially with the French, involving the progressive severing of military ties with the United States. The fracture will be brought about by procurement decisions that have yet to take effect but which will have a vital influence on future military and political decisions. All this is happening in front of our noses and yet, as we have remarked so often on this blog, there seems an almost wilful refusal to join up the dots.

The myopia of the Conservatives is illustated by the comment in the Mail piece from their defence procurement spokesman, Gerald Howarth, who bleats: "This shows the danger of the American refusal to give us the technology. They could drive us into the arms of the French".

This is a line Howarth has taken consistently, marking his refusing to acknowledge that the US reluctance to share technology with us stems from their observations of our closer defence ties with the French and other European countries, the EU enthusiasm for lifting the Chinese arms embargo, and the risks of technology leakage to the Chinese.

The JSF, therefore, is very much the litmus test. If the UK does walk away from this aircraft and buy Rafales, then at least what we have been warning about will be out in the open - not that it will make a blind bit a difference to what The Business today calls: "the dim-witted Tories".